Gush Etzion Regional Council leader Shlomo Ne’eman had words of praise on Wednesday for Labor Party leader and future minister Amir Peretz after he promised that he “will not oppose Gush Etzion being part of the State of Israel.”

The remarks came on a day in which US Secretary of State Mike Pompeo expressed praise from the American government for the establishment of the Israeli unity government. Pompeo also underlined the fact that the final decision on whether to extend sovereignty to Jewish communities in Judea, Samaria and the Jordan Valley ultimately rests with the government of Israel.

Ne’eman expressed the Regional Council’s positive response to Amir’s promise, calling it a “valuable statement which recognizes that the communities of Judea and Samaria are an integral part of the State of Israel.

“Generations of Gush Etzion residents — from Kfar Etzion to Kfar Eldad, from Metzad to Karmei Tzur — congratulate him on his position,” Ne’eman said.

He emphasized that the population of the region views Gush Etzion “as a pioneering bloc which will erase the disgrace, which is the “Green Line” from the map of the State, and will lead to full sovereignty in Judea and Samaria.”

Meanwhile, Pompeo emphasized at a news briefing that the issue of “annexation” would be addressed by Israel, not by outside parties.

“As for annexation . . . the Israelis will ultimately make those decisions. That’s an Israeli decision and we will work closely with them to share with them our views of this in a private setting.” 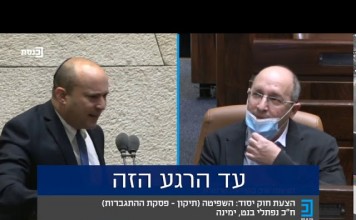