U.S. President Donald Trump became the first sitting president in the history of the United States on Sunday (June 30) ever to set foot in North Korea.


The president and North Korean leader Kim Jong-un were to meet at the DMZ after agreeing to the impromptu summit late Saturday following a proposal by Trump during his remarks to media at a news conference in Osaka at the conclusion of the G20 gathering.

“We are trying to work it out,” he told reporters. “It will be very short but that’s okay. A handshake means a lot.”

The two men ultimately met for talks that lasted about 50 minutes following a joint news conference with media after their historic walk together across the DMZ. During their talks, Trump and Kim agreed to resume negotiations on North Korea’s nuclear program. Each designated a team to restart the stalled talks within the next several weeks, according to Fox News. “Speed is not the object,” Trump told reporters, but rather, the object is “to get it right.”

The president added, “At some point during the negotiation, things can happen,” and said that during their discussion he suggested that Kim could visit Washington, D.C.

But that conversation came after the historic moment in which America’s maverick president took his walk with the mercurial, deadly leader of North Korea across No Man’s Land to North Korean territory — the two of them alone — albeit nearly surrounded by Korean photographers.

On Sunday at around 2:40 am ET as Trump was waiting at the edge of the DMZ together with South Korea’s President Moon Jae-in, the two leaders spotted each other from across the divide and began walking towards each other in deliberate, measured footsteps.

They met, shook hands, and then together briefly walked across the border into North Korea, stood chatting for a moment and then together walked back into the DMZ, making history for both. It was a swift process but one that reverberated around the world.

This is the third time the two men met during Trump’s term in office.

Both leaders entered a small sitting room to meet briefly with reporters prior to holding talks that prior to Friday seemed completely unplanned.

Chairman Kim was first to address the journalists, with his remarks translated into English but difficult to hear above the snapping of the cameras. President Trump’s remarks were easier to hear, in part due to the complete silence that reigned once he began to speak.

“As President Moon said, this is an historic moment, the fact that we’re meeting . . . we’ve developed a great relationship and I really think that if you go back two and a half years and look at what was going on prior to my becoming president it was a very very bad situation and a very dangerous situation for South Korea, for North Korea, for the world,” he said.

The president focused heavily on the relationship between the two men, speaking directly to Kim, saying, “I think the relationship that we’ve developed has meant so much to so many people, and it’s just an honor to be with you, it’s an honor that you asked me to step over that line, and I was proud to step over that line. I thought you might do that, I wasn’t sure, but I was ready to do it, and I want to thank you, it’s been great.

“It’s a very historic day – or as the folks from the media put it, this could be a very historic moment and I guess that’s what it is – but I enjoyed being with you, and thank you very much.”

With that, Trump leaned over towards Kim and extended his right hand; the two men shook hands as aides quickly began clearing the room, clearly to preclude reporters’ questions as to facilitate the talks. 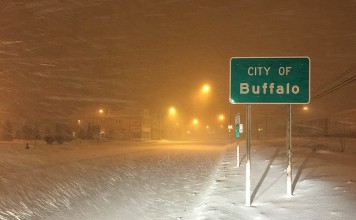