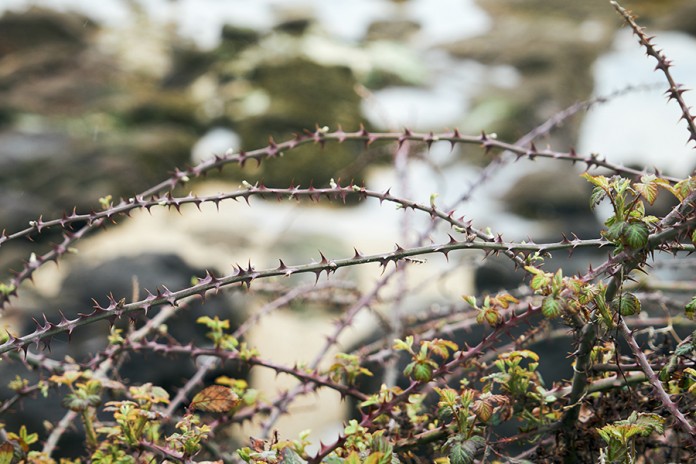 Last week, we began our exploration of 16th century Italian scholar Rabbi Shlomo of Urbino’s list of the 17 different words to connote thorns or thistles in Biblical Hebrew. Commentators and etymology experts offer insights into these different words and the meanings contained in their structure or drawn from the context in which they are used. We thought it would take two more columns to cover them all, but we’ve wrangled these last ten thistles and thorns into one place – so put on your mental gardening gloves and let’s go!

This word appears in the Bible four times in the sense of “thorn” (Psalms 58:10, Judges 9:15-15). It is also the Aramaic word used by the Targum to render the Hebrew word dardar from last week (see Targum to Genesis 3:18 and Hoshea 10:8). The word atad also appears in Goren Ha’Atad – literally “the Granary of the Atad” – where Jacob was eulogized after his death (Genesis 50:10-11). The Talmud (Sotah 13a) finds this name a bit funny taken at face value, because there’s no such thing as a granary for thorns. Instead, the Talmud relates the name to the custom of erecting thorn fences around the perimeter of one’s granary, explaining that a similar thing happened when the kings of Canaan encountered Jacob’s coffin, as the royals placed their jagged crowns around its perimeter to honor him.

This word refers to a thorn known as a brier or stacheldorn and appears only twice in the Bible (Proverbs 15:19, Micah 7:4).

Outside of Biblical Hebrew, the root chet-daled-kuf refers to “cutting,” “pricking,” “injuring,” and “squeezing/wedging in.” Ohalei Yehuda writes that the word chedek may be a portmanteau of chad (“sharp” or “single”) and dak (“thin”), or a metathesis of the word dochak (“force/pressure”). There was a Tannaic sage named Rabbi Chidka, famous for his position that one is obligated to eat not three but four meals on the Sabbath (Shabbat 117b). It would be interesting to consider whether his name is a pun related to these understandings of the root chet-daled-kuf.

The prophet Isaiah compares the Jewish People to a vineyard, with a warning: If they continue to stray away from Hashem, then He will no longer tend to the vineyard and will instead allow shamir and shayit to grow there instead of grapes (Isaiah 5:6; see also Isaiah 10:17). Although the word shamir appears in the Bible eight times in the sense of “thorn” in the book of Isaiah, it also appears three times in other places as something used to cut rocks (Jeremiah 17:1, Zecharia 7:12, Ezekiel 3:9). This latter meaning either refers to some sort of very hard stone that can be used for cutting less hard rocks, or to the legendary shamir worm used for cutting hard rocks (see Gittin 68a). Either way, it relates back to the idea of “thorns” because thorns are sharp and cutting.

The three early lexicographers Menachem Ibn Saruk, Yonah Ibn Janach, and Radak all connect shamir to the triliteral root shin-mem-reish, commonly translated as “protecting” or “guarding.” Shoresh Yesha – and, to some extent Rabbi Hirsch to Genesis 24:6 – say one must watch oneself when dealing with thorns in order to avoid getting hurt by them.

Ibn Janach writes that shayit has a cognate word in Arabic that also means “thorn.” Rabbi Pappenheim traces shayit to the root shin-aleph, which means “uniformity/equivalence.” As he explains it, the word shoah (“holocaust”) also derives from this root, as it implies total uniform destruction. Consequently, Rabbi Pappenheim explains that shayit refers to those thorns and thistles which tend to grow in the ruins of destroyed and desolate places.

The term barkan appears twice in the Bible, both times alongside the word kotz (Judges 8:7 and 16). The early lexicographers Menachem Ibn Saruk, Yonah Ibn Janach, and Radak all categorize this word as an offshoot of the root bet-reish-kuf. The other words derived from that root are barak (“lightning”), barak (“the shiny luster of a sword”) and bareket (a yellowish gemstone, possibly emerald). Radak explains the connection between these three words by explaining that the luster of a polished sword and the glow of a bareket gemstone both resemble the glow of lightning. But neither Radak nor the other grammarians mentioned above indicate a connection between barkan as “thorn” and the meaning of the other words derived from this root. In lieu of such an explanation, Rabbi Yehoshua Steinberg of the Veromemanu Foundation offers the following insight: Even though a shiny sword might look nice, its real power as a formidable weapon is in the sharpness of its blade. Accordingly, Rabbi Steinberg suggests that the word barkan which denotes a “sharp thorn” was derived from barak in the sense of a sword’s glow.

This word appears three times in the Bible (Zephania 2:9, Proverbs 24:31, and Job 30:7). Radak explains it as a sort of grass-like thorn. Others define it as “nettle” or “thistle.” In his work Kesset HaSofer, Rabbi Aharon Marcus (1843-1916) writes, how at its core, the biliteral root chet-reish means “strong and obstinate movement” (in his work Barzilai, he renders it as “anger and destruction”) and proceeds to show how that letter combination combines with every other letter of the Hebrew Alphabet to create triliteral roots related to that concept. Many of those triliteral roots relate to using powerful movements to bore a hole, and that’s exactly how Rabbi Marcus understands the core meaning of the word charul. Ohalei Yehuda offers two more ways of explaining the etymology of charul. First, he understands that the biliteral root chet-reish primarily refers to “heat/dryness,” and thus argues that charul is a portmanteau of that root plus the word lo (“for him”), in allusion to the dry and “fiery” nature of this type of thorn. Alternatively, Ohalei Yehuda argues that the root chet-reish-lammed may be interpreted in light of the root ayin-reish-lammed (“blockage/stoppage,” like the term urel which refers to man whose foreskin is intact and refers to fruits from a new tree which are “blocked” by halacha from consumption) due to the interchangeability of chet and ayin. He understands the core meaning of ayin-reish-lammed to be “covering” and explains that charul refers to a sort of thorn or thistle that tends to “cover” the face of one’s field.

In two places in the Bible (Deuteronomy 8:15, Ezekiel 2:6), the word akrav clearly refers to the deadly insect known as a “scorpion.” In another four places, King Rehoboam portends to act more harshly with his subjects than did his father King Solomon, and especially threatens to torture His people with akravim (I Kings 12:11, 12:14, II Chronicles 10:11, 10:14). In the latter context, the commentators explains that Rehoboam did not mean to use actual scorpions on his people, but rather meant to threaten the use of flogging sticks with thorn-like spikes that resemble scorpions. Rabbi Samson Raphael Hirsch (to Psalms 140:2-4) writes that four-letter animals names in Hebrew that begin with an ayin are not actually derived from quadriliteral roots, but rather derive from triliteral roots with the letter ayin added to those roots. Examples of this phenomenon include atalef (“bat”), achsuv (“venom-spitting snake”), akabish (“spider”), achbar (“mouse”), and, of course, akrav. Rabbi Hirsch thus explains that the root of akrav is kuf-reish-bet (“approaching”) and refers to its perpetual readiness to engage in “warfare” (krav) and attack those who threaten it. Akrav seems to refer to “thorns” in a borrowed sense, as something whose pokey protrusions are scorpion-like. Interestingly, a place named Maale Akrabaim is mentioned three times in the Bible (Numbers 34:4, Joshua 15:3, and Judges 1:36), but it’s not clear if or how that city in the southern part of the Holy Land is related to “thorns” or “scorpions.”

The Vilna Gaon (to Proverbs 24:31) differentiates between kimosh and charul by noting that kimosh refers to thorns that grow along the perimeter of a field, while charul refers to any ordinary thorn that one might could touch and get “burnt” (i.e., pierced/poked). Perhaps we may somehow connect the word kimosh (spelled with a kuf) to the name of the Moabite deity Chemosh (spelled with a kaf).

This word appears only once in the Bible, when Job tries to assert his innocence by saying that if he had not given to the poor the tithes required of him, then “instead of wheat shall come out cho’ach, and instead of barley, bashah” (Job 31:40). From its juxtaposition to cho’ach, the commentaries understand that bashah is also a type of “thorn” weed that grows in one’s field. Rabbi Pappenheim traces this word to the biliteral root bet-shin (“cessation of movement”), whose main derivative is the word bushah (“embarrassment”) and from that gave way to various words that bear negative connotations such that people would be embarrassed to be associated with them, like ba’ash (“putrid/spoiled/disgusting”), be’ushim (“bad quality grapes”), and – I would add – possibly the Aramaic word bisha (“evil/bad”).

Now that we’ve seen the entire list, we can better appreciate a comment that Rashi made off the cuff. After Rashi (to Ezekiel 2:6) cited Donash’s explanation of the word saravim as referring to thorns, Rashi very nonchalantly added that there are twenty words for this noun. The same statement is found in Rabbi Saadia Gaon’s commentary to Proverbs (15:19) after he defines the word chadek as “thorn.” With our entire list in mind, we can now understand exactly what Rashi and Rasag meant when they claimed that there are twenty words for “thorn” in Hebrew. Although, if you’ve really been keeping track, we actually have 21 words (including na’atzuz). 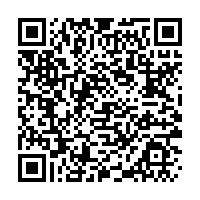