This week, I acquired a first edition of a volume of Me’am Lo’ez published in the 1770s in Constantinople (today Istanbul), Turkey. The Me’am Lo’ez is likely the most popular Ladino work ever published and is still widely read today in translation.

Ladino – or Judeo-Spanish as it is at times known – is a language derived from Old Spanish. Originally spoken in Spain, it traveled with the exiled Jews of 1492 to their new homes in the Ottoman Empire, North Africa, Middle East, and parts of Europe. It served as the first language of millions of Sephardic Jews over the centuries though the Holocaust (in which approximately 50 percent of Ladino speakers were murdered).


Interestingly, books in Ladino were rarely published until the 18th century. Hanghagot HaChayim by Moshe Almosnini was published in 1564; Shulchan HaPanim, a Ladino translation of the Shulchan Aruch, was published in 1569; and between 1571 and 1600 several Ladino editions of parts of Nach appeared as well. But from 1600-1729, no more than three Ladino books were published in Constantinople, and Salonika’s presses weren’t active at all. How do we account for this dearth of Ladino works? 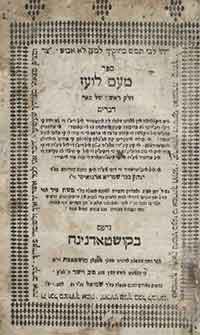 The answer can be found in the second Ladino book published in Salonika, the 1569 Shulchan HaPanim mentioned above. In it, the anonymous translator notes two objections voiced against publishing Jewish texts in Ladino:

1) Readers may disregard or even forget Hebrew.

2) Tanach should not appear in a profane language. There should always be a clear distinction between kodesh and chol.

In his introduction to Meam Loez (whose first volume appeared in 1730), Rabbi Yaakov Culi also addresses the objections to publishing in Ladino and he – as does the anonymous translator of Shulchan HaPanim – points out that the Rambam wrote most of his works in Arabic. The Rambam’s behavior did not lead Jews to forget Hebrew, so why should modern authors have a problem with publishing in languages other than Hebrew?

Indeed, they argue that the publications of Ladino works may very well lead to a more thorough understanding of Jewish sources and may lead people back to the original Hebrew and Aramaic sources. They both conclude that even if publishing in Ladino is problematic, doing so will yield more good than harm.

Following the great popularity and success of the Meam Loez, numerous other works in Ladino followed suit, bringing rabbinic Literature, ethical works, and later fiction to the general population.