I had the good fortune to acquire a collection of letters sent from Ephraim Deinard to fellow bibliophile Elkan Nathan Adler. Ephraim Deinard (1846-1930) was among the most famous booksellers of all time, with a career spanning many decades and continents.

Deinard is credited with building many of the major Jewish libraries in America and discovering many important manuscripts and printed books in his travels throughout Europe and the Orient. The letters contain a treasure trove of information on bookselling and collecting, and life in rural America in the 1890s to early 1900s, as well as Deinard’s never disappointing, entertaining writing. 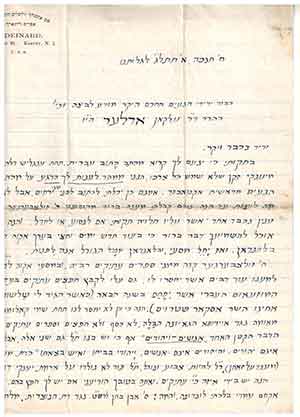 Deinard spares no one from his sharp critique, with attacks on the Reform movement, American Jews, the Zionist conference, other booksellers, chasidim, and nearly everyone else that Deinard encountered. Even Elkan Adler himself receives an abundance of abuse from Deinard’s pen, with numerous pokes at Adler’s complaining of his financial situation. Deinard often refers to Adler in these letters as my “poor, rich friend.” There are discussions as well on Karaites, Sabbateans, Samaritans, the Jews of China, and other Jews he encountered during his numerous travels. The letters, written over several years, were sent from throughout the world, with some letters marked, for example, from Ferrara, Constantinople, Ramleh, Kearney, NJ, Mantua, Salonica and Beirut.

Unlike much of his published work, the letters are very readable and are written in an attractive block script, different from any of the other writing of Deinard that I was able to locate. From reading the letters, one suspects that Deinard didn’t put much faith in the ability of Adler to comprehend his usual literary style, or be able to read his script handwriting, thus his use of this script and style. The massive quantity of books discussed is also of note; Deinard speaks of shipping 50 boxes and 30 boxes of rare books from one port to another. It may be worth contemplating what the fate of such books would have been had they still been in Europe during WWII.

Deinard produced some 70 volumes whose subjects range from Jewish history and antiquities (especially of the Crimea, Russia, America, and The Holy Land), to treatises against Chasidism, Christianity and communism, parodies, medieval and modern Hebrew literature, Jewish religion and especially booklore.

Deinard’s antiquarian activities, which involved constant travel throughout Europe, the Orient and America, gave him a unique acquaintance with scholars, private collectors, fellow booksellers and libraries. He came into both contact and conflict with numerous Hebrew writers and Jewish communal and political figures. His wide-ranging knowledge and experience are fully reflected in his own voluminous writings, mostly in Hebrew, produced over more than half a century. His scope of interest, the intensity of his sentiments, the acerbity of his remarks, all coupled with his bibliophily, render Deinard’s works a source of contemporary Jewish historical and literary controversy, as seen in the margins of the Hebrew-reading world, before and after World War I.

The recipient of these letters, Elkan Nathan Adler (1861-1946) was an English author, lawyer, historian, and collector of Jewish books and manuscripts. Adler’s father was Nathan Marcus Adler, chief rabbi of the British Empire. He traveled extensively and built an enormous library, particularly of old Jewish documents. Adler was among the first to explore the documents stored in the Cairo Genizah, being the first European to enter it. During his visits to Cairo in 1888 and 1895 Adler collected and brought over 25,000 Genizah manuscript fragments back to England.

Below are some selected snippets from the letters, loosely translated from the Hebrew.

“As I could not read the name of the street address of the wealthy Jew under any circumstance, since the handwriting of your secretary is without a doubt the reincarnation of the angel who wrote on the wall of Belshazzar.”

“I did not complete my travels, particularly, I did not travel to China to research and search for the Jews who are dwelling there from ancient times… until this day, not one of the multitudes of Jews has risen to the task of searching for his lost brothers in this faraway land.”

“Had I not feared that you would awaken a whale on the account of your spending money, I would have sent you a list of the manuscripts currently in my possession. Without a doubt you could have chosen from them many, but to my despair I am at a loss. How can I comfort you to wipe the tears from your face? Shall I comfort you that a beautiful and rich wife fall in your lot? This would be a false comfort, as books are an abomination even to intelligent women.”

“H. Freidus showed me your book regarding manuscripts and I discovered that you referred to me as a ‘curiosity,’ on what did you base these words? I swear on the life of Pharaoh! that I do not know, is it because I am a traveler, author and printer of old books? Had I not been a traveler, printer and collector of ancient books, had I then not been a curiosity? If you wish that I agree to this matter, I will reveal to you what a curiosity I had when I first opened your book and found major errors… I know without a doubt, that no one knows the Karaites better than I do.”

“Indeed there are at this time buyers in America, thirty years will not pass and you Europeans will come to America to look for rare books. Who more than I knows that European booksellers send all their finer books to the new world… I can make Europe like a deep ocean with no fish…and this is indeed the ambition and goal of our dear friend and scholar, M. Sulzberger. It is my hope that not many days shall pass before Torah shall sprout forth from America to Israel… and the leprosy which is Reform Judaism shall turn white.”

“When G-d shall bring you to New York, the capital of the world of humbug and eternal deception… my dwelling is just 15 minute distance from New York but my soul is 500 year distance from it. If you would honor me with your visit to my home, you shall find here a Russian Jew, living alone between gentiles in a lone house in a village, studying with his books all day and part of the night. His family surrounds him and they are content with their meager lot… but alas, I am a Jew from the tips of my toes to above my nose, and this prevents me from resting at peace in my home…” 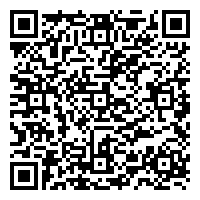