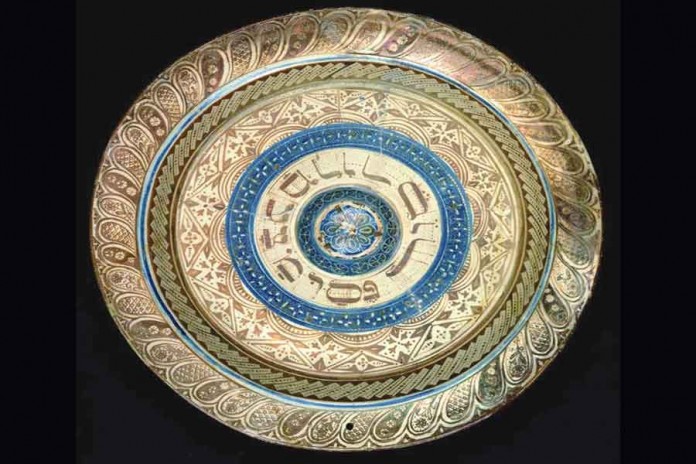 For this column, I thought I would share some interesting items relating to Pesach that have appeared at auction, are in a museum, or are from my personal collection. 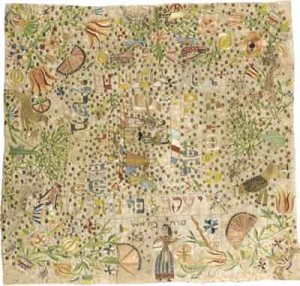 Sotheby’s, after more than a decade of holding their Judaica auctions in Tel Aviv, decided to bring those auctions back to New York in 2004. One of the most exciting moments of these auctions from the past 16 years was during the 2005 sale, when a textile decorated for use as a matzah cover sold for $363,200, which was simply incredible given that the estimate of the lot was $15,000 -$20,000. Many in attendance that day (myself included) had shocked expressions on their faces, and were simply gobsmacked. Why so much?


In the catalog, the lot was titled “An important embroidered Passover Matzah covering, Germany, 1703.” This textile, “richly worked in coloured thread and applied with sequins,” was profusely decorated with flowers, trees, animals, a center scene of men baking matzah, a Hebrew dedication including the date, and finally, a woman holding a harp and titled above her head “Serah bat Asher.” Who is this woman?

Serah was the daughter of Asher, one of the sons of Yaakov. Serah was the first to tell Yaakov that his son Yosef was still alive in Egypt. However, fearful that a revelation of this magnitude might be too overwhelming for Yaakov to bear, she was instructed by her uncles to break the news gently by singing the message while playing her harp.

There is a small but passionate subset of Judaica collectors who seek out items that are related to Jewish women in some respect. The majority of Judaic textiles are assumed to have been made by women, so pieces like this matzah cover already attract would-be bidders. Add this to the very early date of manufacture, the remarkable state of preservation of the piece itself, the charming way the decorative elements were arranged (and quite skillfully executed), and perhaps most importantly, the prominent depiction of a Jewish woman from the Torah who rarely (if ever) is found on other known pieces of Jewish ceremonial art – and a “perfect storm” was created in the desirability of this piece. This is why it realized a price that was 20 times the estimate given by the auction house.

From my own collection, here is one of my favorites: a miniature calendar for counting the Omer. Standing only four inches tall, this carved wooden case with knobs contains a piece of parchment that displays the blessings to say for every one of the 49 days of the Omer. The parchment, hand-inked by a scribe, is only half an inch wide. While a substantial number of miniature books for counting the Omer are known (the most sought after are hand-inked 18th century examples from Italy, Germany, and the Netherlands), this example would not be considered a book.

After consulting an expert in Hebrew manuscripts, who told me that there is nothing remarkable about the letters on the parchment – “it is typical for 18th and 19th century Europe,” he said – based on the type of wood used in the casing, I can determine that this piece probably hails from Germany and likely dates to the early 19th century. There are a number of free-standing Omer calendars in various museums, and a few are small in stature, but I cannot locate any that are anywhere near as diminutive in size as my example, which I can only assume was made not so much as an amusing trinket of sorts to be placed on a desk or nightstand, but to be used for traveling, perhaps by a merchant. 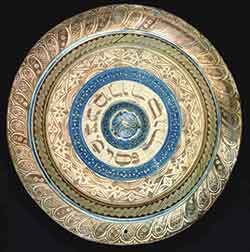 Next we come to what is considered a truly iconic piece of antique Judaica: a Seder tray from Spain. This plate has been featured on the covers of numerous books, magazines, calendars, etc. The earliest known Seder tray in existence, this plate belongs to a small group of Jewish ceremonial objects that survived the expulsion from Spain. Made of ceramic that was hand-painted, the plate dates to circa 1480. In the center of the plate are the words “Seder Pesach Matzah Maror.” However, many of the letters are poorly formed, as the daled in “Seder” looks like a reish, the chet in “Pesach” looks like a reish, and the hey in “Matzah” looks like an ayin. These blatant errors are thought to be the result of its having been copied by a non-Jewish artist who was unfamiliar with Hebrew letters. This truly priceless piece of Judaica resides in the Israel Museum in Jerusalem. 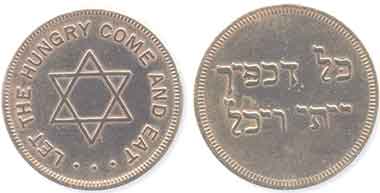 Another item I own is a brass token, likely issued during the 1920s or 30s. Unlike other Jewish tokens from America, there are no details as to what charity this token was for; no place of origin, no name of an organization, nothing. Instead, it simply states the famous Haggadah verse, “Let the Hungry Come and Eat” in English on one side and Hebrew on the other side. Was this token given as appreciation to a donor to a charity, or was it to be used by a poor person as currency? Was it a year-round charity for food, or specifically for Pesach, a Maos Chitim fund? I have not found answers to any of these questions, nor even where it was issued, although somewhere in New York City would be an obvious best guess. In 25 years of collecting, I’ve seen this token only two other times, which is odd in and of itself, as all other Jewish-American charity tokens were issued in substantial quantities and those examples are easily located. 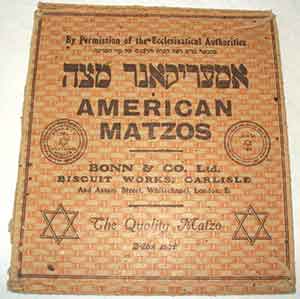 Finally, since we are all experiencing a most worrying time right now in our country and indeed the entire planet, I thought I would end with this item from my collection: a folded cardboard box for matzahs. As seen by the transcribed inscription below (which is featured on the inside of the box), this was used at a Seder service while World War Two was still raging, as victory in Europe would not be declared until May of 1945. The Seder attended by this soldier had such meaning for him that he felt it necessary to rescue an empty matzah box from the trash, and record some specifics of those two nights.

What had this soldier experienced? What horrors might he have seen? His future, and the future not just of the Jews, but of the entire planet was at stake. He must have felt such a sense of relief and relative normalcy in his life that he could attend a Seder in a European country that had been liberated only a few months before from the Nazis. Like that soldier, I can only hope we will very soon, please G-d, look at our current days as a “bad memory,” and we will conquer this virus and the troubles that come with it. 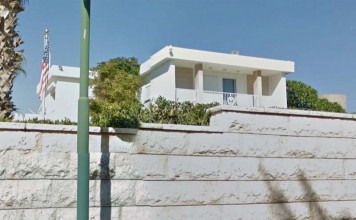 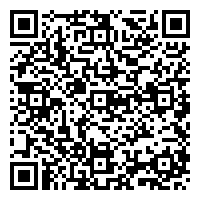