All of us are shocked and saddened by the recent residential building collapse in Miami. As I continue to read articles regarding this tragedy that has struck so many fellow Americans, including a large percentage of Jews, I am moved by the number of Jewish charitable organizations that have offered help to the families of the victims and the people involved in the recovery efforts. In light of this, I thought I would take a brief respite from answering questions about the origin and value of Judaica heirlooms belonging to Jewish Press readers, and instead, share some images from my personal collection that detail Jewish charity organizations hailing from Poland from before the Shoah.

For the last 20 years at least, metal-detecting enthusiasts across Eastern Europe have been scouring the battlefields of World War II for parts of military uniforms such as unit badges, helmets, and personal items that soldiers who fell would leave behind. Invariably this has led to some of them venturing out to areas where Jewish communities previously existed, both large and small, up to and including areas where ghettos were formed before the inhabitants were transported to the death camps.

The pieces shown here are what I have acquired from dealers in Poland in recent years. I have done little research on them, as from what I can gather, I can only find references to these organizations in institutional archives of pre-war Yiddish newspapers and Yiddish books from Poland – which renders me helpless, as while I am fluent in Hebrew, I do not understand Yiddish. So unless there is an exact worded reference that I can read, I can only speculate as to where in Poland these pieces originate if no city is stated on them.

As for the items themselves, typically, for pieces of metal that have been buried in the earth for 75-plus years, minerals from the soil have corroded the metal, and even with proper cleaning, the condition of most of these finds end up retaining irreversible damage. 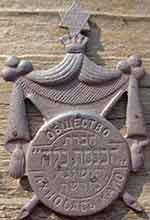 Shown here is a badge which in the center reads “Chevras Hachnosas Kallah Rishona B’Varsha” (Society for Helping Poor Brides, the First in Warsaw). Surrounding the Hebrew, it states in Cyrillic “Society of Hachnosas Kallah.” The words are on a background of draped curtains (possibly referencing a wedding canopy), topped with a crown and Star of David.

When I first saw this, I was puzzled as to why Cyrillic was used as a second language and not Polish. I soon found out that Warsaw was under the control of the Russian Empire from the second half of the 19th century up until 1915, prior to Germany’s occupation of the city, which concluded in 1918 when Warsaw became part of the newly independent country of Poland. Russia instituted various forms of cultural assault on the Polish residents of Warsaw, including strong “discouragement” of using the Polish language itself (if not outright banning), and insisting on Cyrillic. Thus, it appears doubtful that this badge dates to after 1914, and after 1918, Polish would have been re-introduced. 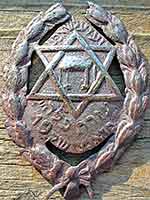 Here is another badge, with a clear depiction of a wedding canopy on four poles, inside a large Star of David. Around this it reads in Yiddish and Hebrew “Gezelshaftn Ezras Kallah Franciszek 19” (Society of Helping Brides, 19 Franciszek). While no city is stated for this badge, it does give a street address. After contacting Jewish museums in Poland, I was told that “Franciszek” is a very common Polish name and is widely used throughout Poland as a street name. It is not possible to find out in which city this charitable society was located before the Second World War. I have, however, seen this street name repeatedly in Yiddish newspapers from Krakow, so perhaps that is the city of origin for this badge. 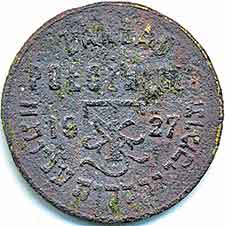 Here also is a pinback button, and it is less than half the size of the previously mentioned badges. At the top it states in Polish “Zakład Położniczy” (Maternity Department), and at bottom in Hebrew “Tomchei Yuldot Aniyot” (Support of Poor New Mothers). The center denotes the year 1927 with a decorative emblem, presumably of this organization. Unlike the badges, this button lacks both a city and street name. However, I was able to find a brief mention of Tomchei Yuldot Aniyot in the January 9, 1929 issue of the Yiddish newspaper Grodner Moment. It states that the organization was located at 38 Dzika Street in Warsaw. 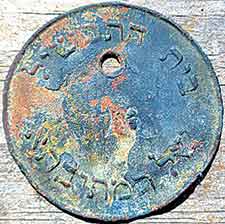 Next is a large disc that has a hole punched in the middle along with a stamped number 376. In high-relief Hebrew lettering it states “Beit Hatavshil shel HaMesivta” (Soup Kitchen of the Orthodox Academy). This was likely used as a pass for a needy student to receive a meal at no charge. In 1917, Gerer Hasidim opened a yeshiva in Warsaw called HaMesivta. This soup kitchen token could be for that yeshiva. 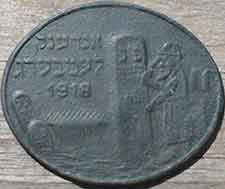 Finally, here is a pinback button for which I am not clear of its exact purpose. In remarkable detail, it depicts a bearded man with a bowler hat, standing in a cemetery, surrounded by gravestones with the Hebrew letters Peh Nun on them, which stand for the words Po Nikbar (Here Lies). In his left hand he holds onto a cane, and his right hand is by his forehead, indicating he is in emotional pain, perhaps wiping away a tear. Opposite this scene, it states in Yiddish “Andenk Lemberg” (Remember Lemberg) with the year 1918 noted.

What has been overshadowed by the Holocaust and largely forgotten today are the widespread difficulties and persecution that Eastern European Jews endured during the First World War and even after its official conclusion. Starvation, disease, and pogroms afflicted many Eastern European Jews.

The city of Lwow, also known as Lemberg, was then located in Poland, and today is part of Ukraine and is known as Lviv. The Lwow pogrom was perpetrated by Polish soldiers and civilians against the Jewish inhabitants of Lwow. It happened between November 21 and 23, 1918 during the Polish-Ukrainian War, which lasted until July 1919. During three days of unrest, it is estimated that between 52 and 150 Jews were killed, and hundreds were injured.

Going into a bit more detail about this specific pogrom, it is sickening to learn that rioting Polish soldiers claimed that their officers allowed them 48 hours to pillage Jewish quarters as a reward for capturing the city from the Ukrainians. In addition to the looting and killing, Jewish women were raped by mobs. Polish forces also humiliated Jews. For example, they forced a group of Jewish high school students to participate in compulsory labor and “pranking” older people. These youth had their beards pulled and were forced to jump over tables, to work in the most demeaning jobs (like cleaning latrines), and to dance to the delight of Polish onlookers. According to Jewish witnesses, Polish civilians, including members of the intelligentsia, took part in murdering and robbing Jews.

Was this pinback button given as a token of appreciation for a donation to a fund to help surviving victims of this pogrom?

These small items are a testament to a flourishing, charitable Jewish way of life in early 20th-century Poland that was also riddled with immense pain and destruction inflicted by their fellow countrymen.