The name of this blog comes from Psalm 60:6:

To those who fear You, You gave a banner to be raised high, for truth’s sake, Selah!


Rabbi Samson Raphael Hirsch zt”l observes on that verse in his commentary to Sefer Tehillim:

“It has been our experience throughout our history that, whenever the nation, influenced by godly men, returned to the path prescribed by duty to God and His Law, Israel would also find political deliverance from the hostile neighboring states. On the other hand, whenever Israel has loosened its bonds of loyalty and flagged in its adherence to the path of duty, it would find itself shackled once more by political defeat and slavery. Each one of these experience was a nes le’hitnoses, a ‘banner’ calling upon Israel to rise to its height, symbolizing the fact that the only way in which Israel could attain permanent political independence and freedom would be by koshet, ‘adorning’ or shaping every aspect of its life, both material and spiritual, so as to be in conformity with the goal set by God.”

The previous year saw so many antitheses to this Divinely ordained path. As just a few examples:

When a Jew is shot to death in Eretz Yisrael and the murderer plea bargains to a twelve-year sentence, Israel’s banner is low.

When the state frees murderers without even informing bereaved families, Israel’s banner is low.

When elderly women suffer chronic harassment in cities like Jerusalem and Lod, Israel’s banner is low.

When numerous citizens drive in fear of terrorism, Israel’s banner is low.

When soldiers feel humiliated by orders that forbid them self-defense and endanger their lives, Israel’s banner is low.

When a synagogue in the holiest city on earth is desecrated, Israel’s banner is low.

When the burial site of our patriarchs and matriarchs is vandalized, Israel’s banner is low.

When the Jewish People’s holiest site becomes a staging ground for riots and neo-Nazism, Israel’s banner is low.

May 5774 be the end of this wretched pattern. May this year see a shift from passive awareness to the application of consciousness, to paraphrase Rabbi Aharon Lichtenstein. May 5774 be the year the Jewish People raises its banner in fulfillment of destiny and duty.

Netanyahu: ‘Those Who Rise Up to Kill Us Will be Killed’

Buses on Shabbat: What Would Rabbi Samson Raphael Hirsch Say? 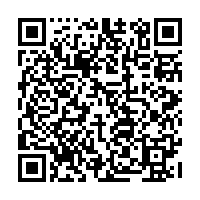