An Arab teen was shot by IDF soldiers while attacking Israeli drivers on Highway 60 in Judea on Wednesday.

Arab media claimed the teen, 16-year-old Omar Madi, was shot in the chest. He later died of his injuries in a Hebron hospital, according to the Bethlehem-based Ma’an news agency.


Madi and several other terrorists were throwing rocks at Israeli drivers as they drove on Highway 60 past the Arab village of El Aroub, a few minutes south of Gush Etzion.

“During routine IDF security activity, forces spotted assailants hurling rocks at civilian vehicles on Route 60, adjacent to El Aroub,” said an IDF spokesperson. “Forces responded to the immediate threat and fired towards one of the attackers.”

Rock-throwing is a primitive but lethal form of warfare that is extremely effective, particularly when aimed at a moving vehicle.

Numerous Israelis have been wounded and more than a few permanently maimed and killed as a result of these attacks.

A year ago this week, four-year-old Adele Bitton was laid to rest after two years of constant hospital stays following a rock attack on a car in which she was a passenger.

Adele’s two sisters were also in the vehicle as her mother Adva Bitton lost control of the car after being struck in a rock attack. All four, residents of the Jewish community of Yakir, were injured.

In 2011, two-year-old Yonatan and his father, Asher Palmer, both residents of the Jewish community of Kiryat Arba, died in a similar attack.

Two Arab terrorists killed the father and son by throwing a huge rock at their vehicle near Kiryat Arba. The windshield was smashed and Palmer was hit in the head by the rock. He lost control of his car, which overturned.

In July 2013, a military court convicted the two Arabs responsible for the murder and sentenced them to double life terms in jail plus 58 years – the first time rocks were recognized as murder weapons in the State of Israel.

One of the two terrorists responsible for the Palmer murders was a member of the Palestinian Authority Security Force. He was the ringleader of a terrorist cell that attacked Jewish motorists several times. 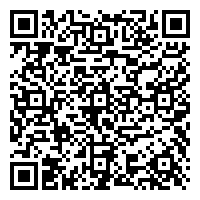