New York Gov. Andrew Cuomo ordered state officials from the Division of Human Rights and the Cyber Incident Response Team to provide assistance to the North Shore Hebrew Academy school community in the wake of a disturbing anti-Semitic hacking attack.

The move comes after the Long Island school’s homepage was replaced with Nazi images and propaganda, which is being investigated by local and state law enforcement, as well as the FBI. In addition to the website, students were emailed hate-filled screeds and images, and families’ home addresses and financial information were compromised.

“This anti-Semitic attack is simply despicable, and the fact it came as the school community celebrated Hanukkah makes it even more repulsive,” Cuomo said on Friday afternoon. “As we work with our partners on the local and national level to hold the perpetrators accountable, New York State will deploy resources to help the staff, parents and students at North Shore Hebrew Academy in the aftermath of this senseless act.

“By deploying these resources, we are sending a message loud and clear that hate has no place in our state—online or in person—and that New York will always support and protect those targeted for crimes based on who they are or what they believe,” continued the governor.

The Division of Human Rights is expected to coordinate a virtual forum for the school community to help families discuss the incident and learn about resources to combat hate, as well as how to deal with other impacts from the hacking.

In addition, the governor ordered the state’s Cyber Incident Response Team, a division of the state’s Homeland Security division, to work with the school to prevent future attacks.

This was not the only anti-Semitic incident the governor addressed over the weekend. On Sunday, Cuomo ordered New York state’s Bias Crimes Task Force to investigate vandalism at a girls’ school in Brooklyn, N.Y.

“I am disgusted by reports of anti-Semitic graffiti that was recently found scrawled on the side of Mesilas Bais Yaakov in Brooklyn. This bigoted attack, which came as the family of New York celebrated Hanukkah, is simply despicable, and the fact that these vandals targeted an institution focused on educating our children makes their act of hate even more reprehensible,” he said. “Over the last nine months, New Yorkers have shown that we are both united and loving, and we will not let those who wish to divide us succeed.” 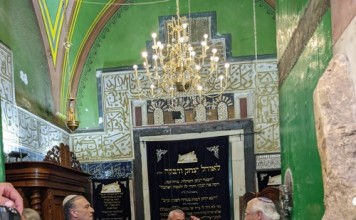