A trip to attend an Iftar meal on Wednesday night to break the Islamic Ramadan fast in the Palestinian Authority capital of Ramallah turned out to be much more exciting than activists from the leftist “Two States, One Homeland” organization expected.

The group of nine activists drove in their vehicles into the city, which is located in an area designated as Area A under the Oslo Accords, meaning it is under the complete administrative, legal and security control of the Palestinian Authority.


Israelis are forbidden to enter this area without the specific authorization of the PA government.

Apparently the members of the group were invited by unidentified Arab “friends” who are citizens of the Palestinian Authority to attend an Iftar meal in Ramallah, although it is not clear who issued the invitation.

However, the group was “welcomed” in the manner reserved for most other Jews as they headed towards the PA capital.

“Late Wednesday night nine Israelis entered Ramallah of their own volition. One of their vehicles was damaged by firebombs and rocks that were hurled at the travelers,” the IDF later told reporters. “No injuries were reported.

“Eight of the Israelis exited voluntarily; the ninth Israeli left with the assistance of an escort by Palestinian Authority police,” military officials continued, explaining that the activists were not allowed to remain in Ramallah. One of the group was not pleased with this turn of events.

“The Israelis were transferred to Israeli security personnel for follow-up,” the IDF added, noting “An investigation has been launched into the reasons behind the entry of the Israelis into Ramallah.”

Despite all the conflict and difficulties that have taken place between the two populations over the past eight months, it is clear that when it comes to some matters, at least, cooperation still exists between the two security forces.

The activists themselves saw things quite differently — and some of the things that occurred apparently they did not see at all. Following is the account of the night’s events, as related by the “Two States, One Homeland” group.

“This evening activists from “Two States, One Homeland” set out to participate in a joint Iftar meal.

“One of the vehicles apparently torched and sustained minor damage while it was empty. The Palestinian Authority security apparatus quickly took control over the incident and assisted us in filing a complaint.

“At no time did we feel threatened and our Palestinian friends were outraged by the incident.

“The most frightening thing to anyone who wants to maintain the existing situation is to see Israelis and Palestinians who continue to work and speak together.

“We agreed that we would not flinch and will continue with all our strength to bring our two peoples into line.” 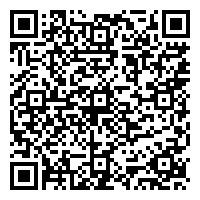