The man, who witnesses said was “armed with a machete” and “silver canisters on his chest” stabbed at least two people on Streatham High Road, a busy shopping area in south London. One is believed to be in serious condition.

“The circumstances are being assessed; the incident has been declared as terrorist-related,” police said shortly after 3 pm local time (5 pm Israel time, 10 am ET). It is not believed there are other suspects, police added.

Prime Minister Boris Johnson said in a tweet, “My thoughts are with the injured and all those affected.”

London Mayor Sadiq Khan also weighed in, saying in a tweet, “Terrorists seek to divide us and to destroy our way of life – here in London we will never let them succeed.”

Metropolitan Police noted in a more recent tweet, “The scene has been fully contained,” and later added, “Please use common sense sand restraint in circulating pictures and videos of the #Streatham incident, including images of the officers involved.”

Motive and nationality of the perpetrator have yet to be determined. 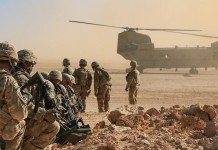