In what could be the most clear-cut, unambiguous condemnation of terrorism ever issued by the U.S. State Department under the Obama Administration, spokesperson Mark Toner released a terse statement to media Sunday evening, slamming the attack on IDF soldiers in Jerusalem by an Arab terrorist earlier in the day.

It’s not clear why Secretary of State John Kerry himself didn’t offer his own condolences to the families or condemn the terrorism, since he had no problem vehemently condemning Israel’s actions just a scant two weeks ago.


“We condemn in the strongest possible terms today’s horrific vehicular attack by a terrorist in Jerusalem,” the diplomatically neutral statement began. The phrasing was carefully worded to strip the mass murderer of any identity, let alone a link with Israel’s so-called “peace partner,” the Palestinian Authority.

Lucky for the world, the Gaza-based Hamas terrorist group, part of the Palestinian Authority by default, managed to get that done earlier in the day.

“There is absolutely no justification for these brutal and senseless attacks. We condemn the glorification of terrorism now or at any time and call on all to send a clear message that terrorism must never be tolerated.”

Again, the statement was careful to avoid assigning blame or identity to those who “glorify terrorism” — as if such a phenomenon occurs in a giant vacuum — rather than to be clear that the Palestinian Authority government is behind the incessant incitement that has been training the past three generations of children, teens and adults to murder Israelis on sight.

Glorification of terrorism is one of the main tools of the trade used by the Ramallah government to keep the fires of hatred burning hot and strong, naming streets and public squares, summer camps and special events after the bloodthirstiest terrorists in history. Such events are routinely translated and documented by the Palestinian Media Watch several times a year.

“Our thoughts and prayers are with the families of the four Israeli soldiers who were killed, and we hope for a full and fast recovery of those injured,” the statement concluded. 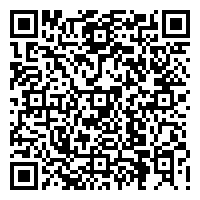