The High Court ruled 8:1 on Sunday that former Yamina MK Amichai Chikli is allowed to run in the upcoming elections for Knesset with the Likud party.

The head of the Central Elections Committee had previously decided to ban Chikli from running for the Knesset, after Chikli had been declared a rebel by the Yamina party. Chikli argued that he was the only member of the party (that hadn’t quit) that kept the party’s mandate they were voted in on.

“I welcome the judges’ decision and am glad that logic and common sense prevailed in the end.
Thanks to the fighter attorney Michael Ravalo and the excellent team by his side, thanks to attorney Alon Pomerantz and attorney Shmarit Karmi-Naamat, thanks to them the important compromise was reached in the district court. Thank you to the brilliant Dr. Raphael Biton who accompanied me throughout the whole year in the tangle of legal battles, to Attorney Guy Bossi who led the legal battle against the right in the Knesset committee, to my wonderful team and to you – the people of Israel – who support, strengthen and hug you all along the way.
This victory belongs to a large extent to the right-wing voters who were deceived by the real retirees, Bennett and Shaked, in an act of political fraud unparalleled in the history of the State of Israel.
Now face forward
For the victory of the Likud and the national camp!
The end of truth forever”

The court also voted 9:0 to allow former Yamina MK Idit Silman to run with the Likud, as well as allowing the disqualified anti-Israel Balad party to run in the upcoming elections.

MK Itamar Ben-Gvir said he plans to fix Section 7a of the Knesset election law to ensure that terror supporters won’t be allowed back into the Knesset under the auspices of the High Court. He said they didn’t bother to waste their time filing a petition against Balad because the decisions of the court were known in advance. 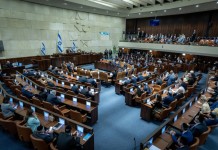