IDF aircraft struck two Hamas observation posts in southern Gaza in the wee hours of Sunday in retaliation for attacks by terrorists about an hour earlier. The attacks triggered the Red Alert incoming rocket air raid sirens in nearby Jewish communities along the Gaza border.

2/ HEAR: The sound of explosions heard by Israeli families who live minutes from the Gaza border.


Hundreds of families were forced to wake young children and race for bomb shelters after “a multitude of explosive devices” were hurled by Gaza terrorists at the border security fence during the so-called “Night Chaos” riots led by Hamas.

One of the explosives triggered an air raid siren in the Eshkol Regional Council district along the border, the IDF said.

Terrorists are attaching explosives to balloons and letting the wind carry them towards populated areas.

We just fired at terrorist squads that launched explosives attached to balloons from Gaza towards Israeli homes. pic.twitter.com/ifWInW62r4

The explosives are being thrown at Israeli soldiers and at the security fence as part of the ongoing “Night Chaos” riots led by Hamas that are taking place at five different sites along the Gaza border. The “night confusion” unit leading the overnight “Chaos” said it plans to step up the pace to a daily round of violence from 7 pm until dawn, with more incendiary and explosive balloons being launched into Israel.

This week marks the one-year anniversary of the start of the weekly – and often daily – violence at Israel’s border with Gaza.

This year of border violence by Hamas has cost the Jewish State millions of dollars in destroyed agricultural equipment, scorched fields, lost crops and irreparable harm to the ecology of the region, in addition to an as-yet incalculable cost for escalated security in the area communities.

And thus far, there seems to be no end in sight. 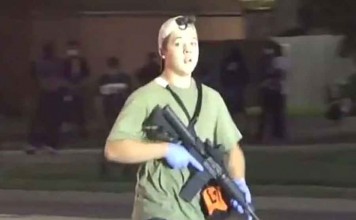