Palestinian Authority head Mahmoud (Abu Mazen) Abbas hosted on Sunday evening in Ramallah a delegation from the Meretz party headed by Nitzan Horowitz, Israel’s Minister of Health, and with the participation of Minister of Regional Cooperation Issawi Frej and Member of Knesset (MK) Michal Rozin. Horowitz left the Israeli Corona Cabinet meeting before it was over to meet with the PA chief.

According to a press release issued by Meretz, Abbas stated that “we must start and create confidence-building measures. Prove that we intend to make peace, and allow me to preserve the hope of the Palestinian people. Because if we lose hope, we will lose the future.”


According to Meretz, Abbas thanked Horowitz for his assistance with the Coronavirus issue. “We live together. When the Palestinians are free from Corona, the Israelis will be free and vice versa,” Abbas said.

Abbas supposedly invited all the ministers in Naftali Bennett’s new government to visit the PA, and in particular Interior Minister Ayelet Shaked. “You don’t have to agree, you have to talk,” he said.

Horowitz stated that “Meretz has a task within the government, to keep the two-state solution alive. Do not let it disappear, and do not sabotage the chance of reaching it in the future, because there is no other solution.

“We believe that there is no room for unilateral measures that would harm the chances of implementing the two-state solution. No new settlements, no illegal outposts, and no violence by extremists among the settlers,” he stated.

Rozin, chairman of the Meretz faction, boasted that “we came here openly, we did not hide, and on the contrary, we came with pride.”

She was apparently relating to Defense Minister Benny Gantz’s meeting with Abbas in August, which was kept a secret. No photographs were released from Gantz’s meeting, unlike from yesterday’s Meretz meeting.

But, according to the official PA’s WAFA news agency, Abbas made completely different statements than what Meretz claims he said.

WAFA reported that Abbas “stressed the importance of ending the Israeli occupation and achieving a just and comprehensive peace in accordance with international legitimacy and resolutions, and the necessity of stopping settlements, incursions, demolishing homes, deporting citizens from Jerusalem, and recovering the bodies of the martyrs,” meaning terrorists whose bodies are held by Israel.

He further warned “against the policy of escalating measures against Palestinian prisoners” in Israeli prisons.

According to that report, the Meretz delegation “affirmed their positions in support of the two-state solution, ending the occupation, and joint cooperation to build bridges of trust, stressing the importance of cooperation in the field of health.”

After the meeting with Meretz, Abbas called Israa Khuzaimia, the mother of an Islamic Jihad terrorist who was killed last Thursday by Israeli soldiers as he shot at them, and offered his condolences.

After supposedly lauding peace with Israel, Abbas called Israa Khuzaimia, the mother of an Islamic Jihad terrorist who was killed last Thursday by Israeli soldiers as he shot at them. Abbas “extended his heartfelt condolences to the family, praying that God may grant her family and loved ones forbearance and consolation.”

Israeli politicians from the right criticized Bennett and the right-wing members of his government for allowing Meretz to revive the “Palestinian” issues, which they said had essentially died away and is of little interest to the world.

Chairman of the Likud faction MK Yariv Levin state that “ministers of the left-wing government continue to crawl on their bellies to Abu Mazen [Abbas], all with the blessing of Prime Minister Bennett.”

“It is more important for the Minister of Health to meet with the terrorist financier Abu Mazen, than the health of the citizens of Israel,” he charged. Horowitz, minister of health, who left in the middle of the cabinet meeting on the Coronavirus to meet with Abbas.

“The current Israeli government has not stopped humiliating itself and completely undermining the powerful status we have built for Israel in years of determined leadership. All this is happening while the Palestinian Authority continues to fund terrorism and work to bring IDF soldiers to international trial in The Hague,” he stated. 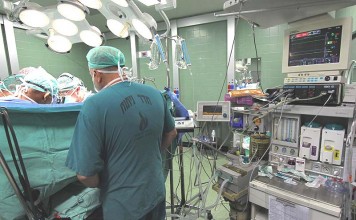