Finance Minister Bezalel Smotrich on Sunday afternoon announced at a press conference that he was implementing the government’s decision to transfer an amount of NIS 138.8 million ($39.5 million) from the funds of the Palestinian Authority to the victims of terrorism, following the court ruling in the Litvak case that compelled the PA to pay the families of victims of terrorism who were murdered by PA Arab terrorist NIS 130 million. The decision was part of the sanctions against the Palestinian Authority, following their motion asking the UN General Assembly to require the International Court of Justice in The Hague to investigate Israel’s “occupation.”

Minister Smotrich stated: “We promised to correct, and today we are correcting an injustice. This is an important day for morality, the war on terror, and justice. There is no greater justice than offsetting the authority’s funds intended to support terrorism and transferring them to the families of the victims of terrorism. The Israeli government is changing its policy and today we are starting the correction. This will not comfort the families of the murdered, but there is justice here. I am happy to have had the privilege of leading this corrective process as one of my first actions as Minister of Finance.”

Ron Alon, son of the late Noa Alon Hy’d, who was murdered in 2002 at the French Hill junction in Jerusalem, said: “This day is a historic day. If there is one thing on which I disagree with the minister, it is that there is comfort here. For one thing, when the families of the victims of terrorism receive compensation, it will not bring back our loved ones, but it will give us a feeling that justice is being done for us. And another thing is the deterrence that is in effect right now, when the PA is hit in the pocketbook – it has an immediate impact. I am happy today to carry the flag for my family and the victims of terrorism.”

Shir Hajaj’s mother Merav said: “I am here today on behalf of my daughter, on behalf of thousands of mothers, fathers, brothers, and sisters who were murdered under the auspices of the Palestinian Authority. No amount in the world will bring our children back, but today there is a feeling that justice will be done. I pray that in the next attack, they will think twice before the PA sends out those people and I believe that this is the beginning of a new way.”

Shurat Hadin’s attorney Avi Segal congratulated Smotrich and said that “there are empirical studies that prove that what prevents terrorism is putting your hand in their pocket, and that’s what we did here.”

Al Quds reported that “the extremist Israeli Finance Minister, Bezalel Smotrich, approved today, Sunday, the decision to piracy 139 million shekels from the Palestinian clearing funds.” By which the news website was referring to the customs and taxes Israel collects on behalf of the PA, which have now shrunk by about a fifth. 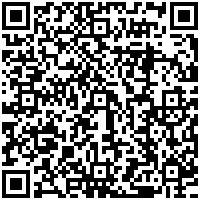