Some 500 Jews entered the Tomb of Joseph in Shechem Tuesday night, accompanied by IDF troops. Throughout the night, local Arabs rioted in the vicinity of the tomb’s compound and on the roads leading to it, burned tires, threw stones, and tried to harm soldiers and worshipers, Hakol Hayehudi reported.


Army forces responded with crowd dispersal methods and fired in the air. Arab media reported several casualties, one of whom was seriously injured. According to the IDF, three of the rioters were arrested. According to Ma’an, the number stands at 17.

Ma’an also reported that about 40 vehicles, including a military jeep, entered Shechem Tuesday night. Then: “The youths lit tires in the streets to confront the Israeli occupation forces and settlers to prevent them from reaching Joseph’s Tomb.”

PA security sources told Ma’an that “12 busloads of settlers arrived at Yusuf’s tomb to perform prayers under Israeli security guards until the morning hours. Dozens of youths closed several stones in the vicinity of the tomb and set rubber tires on fire in an attempt to prevent the settlers from reaching the tomb.”

Turns out this was not enough to hold back the joy of Hanukkah, as both the deputy head of the Samaria Council, Davidi Ben Zion, and the Samaria Brigade commander, Gilad Amit, lit Hanukkah candles on the roof of Joseph’s tomb.

In the best tradition of Arab treatment of other religion’s holy shrines, in recent days, Arab rioters marches to the Joseph’s tomb, which is not under daily Israeli control, and attempted to damage the site. An IDF battalion which recently entered Joseph’s Tomb, discovered that the rioters had pulled out windows in the compound. 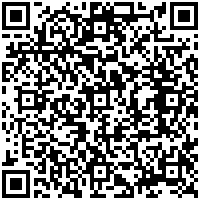