A poll published on Wednesday by Middle East Forum—five years to the day after the start of the 2014 Operation Protective Edge—shows the frustration of Israeli Jewish citizens with their government’s policies toward Hamas in Gaza, and highlights the desire of most Israelis to see their country achieve victory in the Israeli-Palestinian conflict. Respondents also expressed their demand to see the eradication of Hamas, as well as a return to a policy of targeted assassinations.

The survey was carried out over the past two weeks and included 703 Israeli respondents, a representative sampling of the Jewish population in Israel.


o Respondents were asked what they thought was the chance that the Israeli-Palestinian conflict would end in the next two decades. 50% said there was an unreasonable chance; 28% said there was no chance at all for an end to the conflict.

o When asked why the agreements between Israelis and Palestinians since 1993 have failed, 47% blame Palestinian refusal to recognize the existence of the Jewish State of Israel, with a further 16% blaming the Palestinians’ uncompromising stance on core issues such as Jerusalem and the right of return.

o 41% responded that the conflict would only end when the Palestinians give up on their dream of destroying Israel, and that on this point the state of Israel should invest resources into convincing the Palestinians to accept defeat.

o 33% of respondents said the best way to achieve recognition of Israel as the Jewish state was by crushing the Palestinians’ desire to continue fighting. At the same time, 20% favored resuming negotiations, 18% favored promoting economic development in Gaza, Judea and Samaria, while only 9% favored military operations such as Operation Cast Lead and Operation Defensive Shield.

o 84% of Jewish Israelis noted that it was important for Israel to achieve victory against the Palestinians. Among the traditional, religious, and ultra-Orthodox public, these figures rose to 88%, and among Likud voters the figure was almost 93%. As for whether Israel was currently winning the conflict, fewer than 10% felt this was the case.

o When asked to define what would constitute an Israeli victory, 32% said the Palestinian concession of their desire to destroy the state of Israel, a further 32% said a peace agreement with the Palestinians and an end to the conflict, 14% said recognition of Israel by the Arab states, and 12% said recognition of Israel by the wider international community.

o Regarding the attitude of Jewish Israelis towards government policy against Hamas, the figures showed a resounding 82% believing Israel’s policy against the terrorist organization was too soft, compared with only 38% who said the same of Israel’s policies vis-à-vis the Palestinian Authority in Judea and Samaria.

o When asked about the ceasefire with Hamas following the last escalation of violence in south, 68% said they did not agree with the ceasefire. Notably, among respondents from the south, the numbers rise to 75% and among the residents of the north to 77%.

o The survey also raised the question of how Israelis wanted to respond to Hamas’ aggression. Just under half, (49%) of respondents demanded the government completely eliminate Hamas, 18% opted to stop supplying utilities and medicines to Gaza, 14% said they wanted to find a way to cooperate with Hamas, while only 1 in 5 said they supported the transfer of cash from Qatar to the Gaza Strip. In addition, 33% noted that Israel’s security apparatus was too hesitant with the Palestinians.

o In answer to the question of what methods Israel should employ to deter Hamas, 33% favored targeted assassinations, 19% said the death penalty for terrorists convicted of murder, 19% supported the use of overwhelming force in Gaza, and 9% supported cutting off the supply of water, fuel, food and medicines to the Gaza Strip.

o 67% of respondents believed that an end to conflict was in the mutual interest of the two peoples, and noted that the Palestinian people would only see progress and benefit when it laid down arms against Israel.

o As for the source of the conflict, 50% of the respondents claimed that the Palestinians’ refusal to recognize Israel constituted the basis for the historic conflict. In addition, 1 in 3 Israelis expressed regret that the state of Israel has been for decades, focused on managing the conflict, rather than seeking a decisive victory. 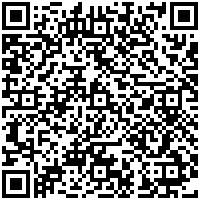