Itay Zalait, the artist behind the golden statue of Prime Minister Netanyahu that was placed in Rabin Square, in front of the Tel Aviv Municipality building in December 2016, has returned to the square Monday morning with a somewhat simpler work: a display of a sagging Israeli flag in front of City Hall.

“Every citizen has to feel what this display does to him in the stomach, what his responsibility is, and what he can do about it,” Zalait told Channel 2 News.


The artist made it clear that he did not interpret the piece deliberately, in order to allow many contradictory interpretations.

“We are in the same location as my previous work,” Zliat said. “In this work I try to examine the polarization between the two. What characterizes the flag in its proper state is that it stands upright, and the straight stance symbolizes correctness, that everything is working properly. But here there is an intermediate situation. Some of the people will look and say that everything is excellent, and some will say that we are on the verge of a collapse.”

Culture Minister Miri Regev expressed her anger at the installation and said that “the flag is falling only in certain parts of society who are not willing to accept the decision of the voter.”

The minister called the performance “a cheap and outrageous provocation of left-wing circles on the margins.”

Of course, Minister Regev is renowned for her own heavy use of the flag – she takes her own, large size flag everywhere – most notably at a pre-election debate with members of competing parties where she urged the audience to clap for her aggressive statements and walked across the stage waving her flag.

One might suggest that if waving the flag—literally—for political reasons is acceptable, the Culture Minister might want to embrace other public uses for the same flag, especially when they appear to be respectful. 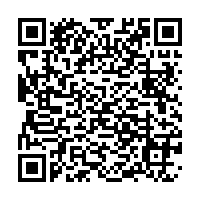