A ceasefire between Israel and the Palestinian Islamic Jihad terror organization in Gaza began Sunday night half an hour to midnight — and Israelis in the south began to hold their breath.

The Head of Israel’s National Public Diplomacy Directorate had confirmed in a statement just an hour earlier that a ceasefire would take effect at 11:30 pm local time.


“The State of Israel thanks Egypt for its efforts,” the spokesperson said.

The final rocket attack was launched by PIJ from Gaza at 11:29 pm – and then, silence. . . until 11:37 pm, when two more rockets were fired at Israel from the enclave. It is likely the final few were the group’s way of defying Egypt and Israel for one last time before succumbing to the inevitable.

Up to the last moment the ceasefire was to take effect, the Palestinian Islamic Jihad terror organization worked hard to get in its final attacks.

A heavy barrage of rocket fire was aimed at the Negev capital of Be’er Sheva shortly after 11 pm, along with rockets fired one after the other at the Negev city of Netivot and the Israeli communities in the Gaza Envelope region.

The rocket fire continued minute after minute in what was, perhaps, the group’s last “hurrah.”

The Israel Air Force was also busy, attacking rocket launcher sites and other terrorist targets in Gaza as rockets were being launched. Earlier in the day, fighter pilots attacked a PIJ attack tunnel built several meters underground, spanning the enclave from the southern border city of Rafah all the way to the border with Israel. It did not, however, cross into Israeli territory due to the high-tech security barrier that reaches deep underground as well as above. 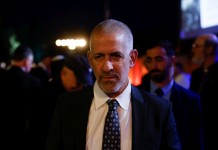