Speaking at a press conference Tuesday night, National Security Minister Itamar Ben Gvir revealed: since taking office, over the last three weeks, all the situation assessments he had heard from ministry experts, the Police, Border Guard, and the IDF present a scenario of Guardian of the Walls 2 at our door. Ben Gvir believes such a scenario has two solutions: a significant strengthening of the blue police and the establishment of a National Guard.

“We have wonderful and dedicated police officers, but the truth must be told: I looked at the pay stubs. A beginner police investigator earns NIS 6,429 ($1,916) a month. A detective earns NIS 7,387 ($2,202), and a rookie patrolman earns NIS 7,350 ($2,191). Our heroic police officers work on holidays and Saturdays, around the clock, and come home with these low sums.

“And it doesn’t end there. Two weeks ago, I toured Be’er Sheva. About 210 thousand people live there, and in all of Be’er Sheva, there are a total of seven patrol cars!!! Seven patrol cars for all of Beer Sheva!!! Do you understand what it means?

“Here’s another story I heard when I was on a tour in Beer Sheva. A resident of Rahat (a Bedouin town nearby – DI) approached me and told me about the wild west in the south. How he and his eight daughters don’t sleep at night because of the incessant shootings. And these are not only the residents of the south. Moshe Vaknin from Kiryat Shmona (up north) woke up a few months ago to face a black day. The truck that had been the source of his livelihood for years was set on fire, only because he refused to surrender to the protection gangs.

“During the riots of Guardians of the Wall, I visited Jewish neighborhoods in Ramla, Lod, and Acco. I saw citizens who feared for their lives and were afraid to go out to the streets as if we are in Hebron in 1929. In the past six months, I moved from one city to another and one community to another. I heard many concerned citizens, and it is clear to me that the time has come to make a significant change of direction, to strengthen personal security and return governance to all the citizens of Israel – Jews and Arabs, religious, Haredi, secular, Circassians, Druze, and Christians. Everyone deserves security.

“Our plan has two parts:

“I call on all the police officers who have left the force in recent years: return home!!!

“In addition, we will recruit 4,000 police officers in the next two years, and fill in the gaps in the equipment and procurement of the Israel Police.

“The second part is the establishment of the National Guard force. We will double the Border Guard, and turn it from a local into a national task force; expand the activity of the special forces against organized crime; turn the intelligence center into an expanded complex of technology and cyber; and establish a nationwide volunteer arm of ten thousand veterans of combat units.

“At the head of these two parts will be Commissioner Kobi Shabtai.

“In the coalition agreement, we obtained a significant budget of 14 billion shekels for the years 2023-2024 for the ministry’s components: the police, the Shin Bet, and the fire and rescue services, and in this matter, I would like to thank Prime Minister Benjamin Netanyahu for his deep insight into the all-important need to restore personal and national security, and I promise here: we will invest the money to restore personal security and governance to all residents of the State of Israel.”

As soon as Ben Gvir’s speech ended, he was verbally assaulted in an unprecedented manner by MK Mickey Levy (Yesh Atid), in an obvious attempt to steal the minister’s thunder. Levy, the former Knesset Speaker, and a former police officer who headed the police Jerusalem district from 2000 to 2004. Currently the chairman of the Knesset State Control Committee, Levy started screaming: “You didn’t come to my committee so I’m coming to your press conference.”

Ben Gvir, who is not known for letting others yell at him without yelling back, shouted at Levy: “You destroyed the police, you destroyed it for two years, give some respect to the commissioner.” Levy left the hall a few minutes later, looking more like a thug-for-hire than a lawmaker. 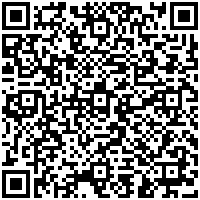