A Jewish owned car carrying a couple and a baby, residents of Katzrin, in the Golan Heights, was attacked with a stone Tuesday morning, close to Shfar’am is an Arab city in northern Israel, Honenu reported. The stone shattered the car window, but by a miracle the baby, who was sitting next to where it landed, was not hurt.

The incident took place on Route 79 between the village of Bir al-Maksur and Shfar’am.

A police car arrived at the scene and took down the couple’s criminal complaint.

“We were on our way to a hike in Nachal Tzipori, we drove near Shfar’am, where they threw a stone at us,” the mother, Tamar, recalled. “Suddenly we heard a loud crack. Luckily for us, the baby’s car seat was on the other side of the backseat. Everything filled up with broken glass.”

Attorney Haim Bleicher of the Honenu legal aid society, which assists the couple in realizing their rights as victims of a crime, said in a statement: “Arab and Islamic terrorism must be eradicated everywhere. When the response is feeble, terror spreads to the inside of the country as well. We call on police and the authorities to act against the terrorists and not deny their existence – which would mean denying terror victims their rights.” 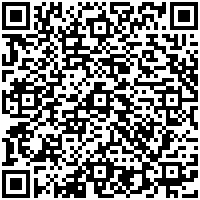