Just before 11:30 AM Sunday, the United Hatzalah Dispatch and Command center received notification from the frantic mother of a young child who was choking at home, on Ben Gurion Street in Hod Hasharon. The nine-months-old infant was losing consciousness.

Dispatchers sent out the urgent alert to all available responders in the area. United Hatzalah volunteer EMT and ambucycle driver Aharon Avital, a professional magician who lives in Elad and works most of the time in the Hod Hasharon performing live magic acts under the name of Aharon HaKosem (Aharon thr Magician), had just finished responding to another medical emergency of a person suffering chest pains near the location of the choking infant. Aharon jumped back on his ambucycle and rushed over.


When he arrived, the mother thrust the choking baby into his arms. Aharon quickly noticed that the child’s skin had already started to turn a bluish hue, signifying that the he was asphyxiating. He began the infant Heimlich maneuver, alternating between administering measured back blows and chest compressions. After a few such maneuvers, the infant spit out a small object that had been lodged in his throat, and after gasping some air let out a shrill cry.

The sound brought joy to both the mother and the first responder. The baby was alive. When the ambulance arrived, Aharon briefed the crew on what had happened and then transferred the baby to be taken with the mother to the hospital for further checkups and care.

“I had just finished responding to another emergency when Dispatch notified me about the incident and said that no one else had responded yet,” the magician EMT recalled. “I am so thankful that I was able to bring this child back to life. Seeing him already blue made me worry about whether or not I would be able to bring him back, but implementing what I know in this instance brought this child who was not breathing back to life. I am very thankful for being able to play my part in helping this child and I hope he grows up to have a long and healthy life.” 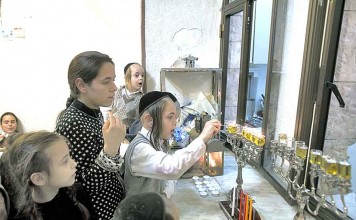