A week after the public storm over El Al’s flight that was stranded in Athens on Shabbat, the dean of Ateret Shlomo yeshiva, Rabbi Sholom Ber Sorotzkin, who was on board the infamous flight from the US to Israel, sent a sharp message to El Al, demanding the carrier apologize by Sunday evening or he, Sorotzkin, call on the Haredi public to choose another airline.

Ateret Shlomo is a Lithuanian network of Torah institutions, which includes a large yeshiva, yeshiva high schools, Talmud Torahs and kindergartens, encompassing about 40 institutions in Israel. Rabbi Sorotzkin’s predecessors were the late Aharon Yehuda Leib Shteinman and, may he merit a long life, Rabbi Chaim Kanievsky.


Rabbi Sorotzkin delivered the following ultimatum to El Al: “I have come to announce that after the negotiations, if by Sunday evening an apology is not issued, unfortunately we will have to agitate within the holy public to prefer other airlines.”

El Al refused to respond to the threat.

At the beginning of his letter, Rabbi Yosef Sorotzkin wrote: “To my chagrin, it has been a week since the event in which the entire Torah observant public was soiled for all to see for things that never happened.”

He continued: “If, by Sunday evening, no apology and explicit clarification have been issued without any clever excuses regarding the aforesaid violation, as well as a correction of the matters relating to said public, we will unfortunately be obliged to act within the holy public to prefer other airlines that at least do not discriminate between people, do not degrade that which is precious and sacred to the people of God, and appreciate their principles.”

Last week, Rabbi Sorotzkin complained that the El Al flight crew had used him: they convinced him to get on the PA system with a calming message that the flight would take only nine hours and ten minutes, and the plane would land in Tel Aviv at 3 PM. But when that plan was changed, the crew never bothered to update him, making him a culprit in their mismanagement. 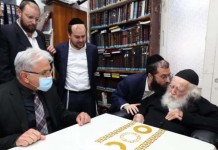