President Reuven Rivlin on Sunday morning issued the following statement in response to the terrorist attack at the Barkan industrial area which killed two Israelis and injured one:

“I am shocked and saddened by this morning’s terrible terrorist attack at the Barkan industrial area. Our hearts are with the families of those who were killed, and our prayers are with those who are injured.

“This was not only an attack on innocent people going about their daily lives, it was also an attack on the possibility of Israelis and Palestinians co-existing peacefully.

“I call on the Palestinian leadership to condemn this murderous attack and to use the forces at their disposal to capture the terrorist and those who aided him.

“Our thanks to the medics who gave quick and live-saving assistance, and to the IDF and security forces who are ensuring the perpetrators are apprehended. We will not rest until every one of them is brought to justice.”

Prime Minister Benjamin Netanyahu said at the start of the weekly Cabinet meeting:

“I will open with this morning’s event in the Barkan Industrial Zone. This was a most severe terrorist attack in which two Israelis were brutally murdered and another citizen was wounded.

“The security forces are in pursuit of the reprehensible murderer. I am certain that they will apprehend him and I am also certain that we will deal with him to the fullest extent of the law, and quickly.

“On behalf of myself and all government ministers, I would like to send condolences to the families of the two people who were murdered and our hopes and prayers for a swift recovery for the woman who was wounded.”

The PA official news agency WAFA on Sunday reported that “Israeli occupation forces Sunday embarked on closing many roads to Palestinian traffic in Salfit district, in the central West Bank, shortly following a shooting incident outside illegal Birkan (sic) settlement in which two Israeli settlers were killed and a third one critically injured.”

Other than that, the PA has yet to comment on the murders, except to accuse “settlers” of closing many roads in the area “in retaliation for the deadly shooting.” 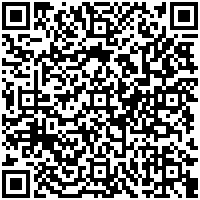