A massive demonstration held Thursday night outside the Prime Minister’s office in Jerusalem marked four weeks since the murder of Yehuda Dimentman in a terrorist attack outside of Homesh in Samaria. Dimentman, who studied at the yeshiva there, died after he was shot in the neck.

Two other people were wounded in the attack. Dimentman left behind a widow and a ten month old baby boy. People are calling for the legalization of the settlement and its yeshiva in response to the attack.


The demonstrators oppose the demolition of the Homesh community which is not authorized by the government and whose structures have been demolished by security forces time and again. They also seek to increase Israeli settlement in Judea and Samaria and the Negev and to restore a sense of security to the citizens of Israel.

Religious Zionist Party leaders Bezalel Smotrich and Itamar Ben-Gvir addressed the crowd. Ben-Gvir told the protestors not to blame Mansour Abbas and his Ra’am Party for the current situation in the country but that they should blame Naftali Bennett himself instead.

Likud MK Shlomo Karhi declared that the people there had come to demonstrate against what he called the anti-Zionist government of Israel and the destruction of new Jewish communities like Homesh. He also said that they were protesting “the destruction of Judaism, and slavery to the Muslim Brotherhood.”

“We have come to warn of the destruction and devastation that the government is inflicting on the State of Israel,” added Karhi. Calling the Bennett government a disgrace he also said, “We will not allow a few people to sell our nation and our homeland.”

“Homesh will not fall again,” promised Karhi. “We will erase every memory of this government and establish a strong, right-wing government led by Netanyahu.”

“We came here tonight to remind everyone and namely ourselves: this country will not be run in collaboration with our worst enemies,” he said. “The only ones who will lead our country are the nation of Israel.”

Ne’eman added: “Those who collaborate with people who physically hurt Jews, in regard to our Negev, Judea and Samaria, the Homesh yeshiva, and the entire country – do not deserve to lead our nation. We are continuing in the path of our father Abraham, the Jewish army who left Egypt, the Maccabees, the fighters of Gush Etzion, and those who learn Torah in Homesh. We will not rest or remain silent in the struggle for our land, our people, and our Torah!” 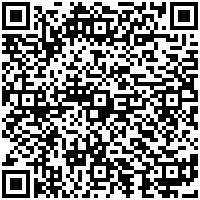