Israeli security forces on Monday fired and neutralized a terrorist near the Elias junction in Kiryat Arba, News 0404 reported.

The terrorist tried to carry out a stabbing attack, but the soldiers acted quickly, fired and neutralized him, lightly wounding him lightly. No Israeli soldiers were injured.

According o the IDF Spokesperson’s Office, a soldier foiled the attempted attack after identifying a terrorist trying to stab civilians and an IDF officer. The soldier fired at the terrorist and neutralized him. The terrorist was evacuated for medical treatment. 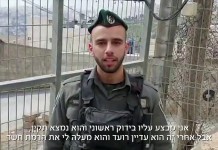