The Taub Center for Social Policy Studies in Israel, an independent, non-partisan, socioeconomic research institute based in Jerusalem, on Tuesday issued its annual report for 2021, which included a Sociodemographic Profile of the South. The results are grim: the Arab population in the south has more than doubled compared to the Jewish population.

The population of the south as a whole is the fastest-growing population relative to the rest of the country. Since 2015, the southern population has grown by 25-29 thousand people per year, faster than the national average. But in the Arab population, the increase was about 3.8% per year, compared with 1.8% in the Jewish population.


At the same time, the level of education of the labor force in the south is the lowest in the country. Only about 40% of Jewish residents aged 30-44 have a bachelor’s degree, compared with about 57% in Tel Aviv and the center. However, due to the large number of factories in the south, the rate of lucrative jobs in industry in this area is the highest in the country. As a result, the chance of a worker in the south being employed in an advanced industry is 76% higher than the national average.

The report is grim regarding Arab society across Israel. There has been an increase in the number of murders in the Arab sector. Even though they constitute only about 20% of the population in Israel, about 80% of all murders in the years 2020-2021 took place in the Arab population.

The Arab population in Israel has a relatively young age profile. There are more individuals aged 0–10 than those aged 20–30 and many more individuals aged 20–30 than those aged 40–50. Nonetheless, a closer examination of the age profile shows a bulge between the late teens and the mid-20s. In fact, Arab men and women account for a higher percentage of 18–22-year-olds than of any other age group: 29%, as compared to 8% in the 70+ age group, 23% in the under-5 age group, and 21% overall.

The study found that the low average levels of education among young Arab men, together with their sheer numbers, is one of the factors driving the rise in crime in contemporary Arab society in Israel.

As the number of young Arab men reaching labor market age has grown, their employment rates have fallen: there was a 7-percentage point drop in the rate of employment among Arab men aged 15–24 and 25–34 during the two years before the Covid-19 pandemic, due to the mismatch between their skills and the needs of the labor market.

The Rise of Arab Women at the Expense of Arab Men

From the viewpoint of education and the chances of success in the labor market, the share of Arab men in their 30s with an academic degree has increased during the past 20 years and today stands at 18%. This is higher than the share among Haredi men (11%), although it is still substantially lower than the share among non-Haredi Jewish men (47%) and is only about one-half of the rate among young Arab women (35%). The near future does not look much brighter in terms of education and labor market prospects given the low scores of young Arab men on the PISA test and the Bagrut (matriculation) exams: they are significantly lower than those of Jews, and now also lower than those of Arab women.

Another factor that will likely contribute to the high rate of crime among young men in Arab society over the coming years involves the emerging trends in the Arab marriage market. The average age difference between a bride and groom in Israeli Arab society is six years. Since cohorts below age 18 are smaller than those aged 18-22, this means that starting from around 2026, the number of men at the normative age for marriage will be about 5–10% greater than the number of Arab women at the normative age for marriage.

This alarming ratio does not even take into account the phenomenon of polygyny in Arab society, found primarily among the Bedouin population, which itself reduces the number of women available for marriage to never-married men.

At the same time, changes in education are increasingly favoring women in Arab society. On the assumption that the increase in levels of education will encourage Arab women to enter the labor market, it can be expected that they will become more independent financially and will have greater freedom in their choice of whether and when to marry and how to live their lives in general.

The first signs of these changes can already be seen: in the rising age of marriage, the growing number of young Arab couples living in newly mixed cities with higher levels of income, such as Nof HaGalil, Carmiel, Arad, and Beer Sheva, and even in the increasing rates of divorce:

Between 2004 and 2019, the divorce rate per 1,000 population grew by more than 50% among Muslims and Druze and even more among Christians. Another outcome of change — though still marginal — can be seen in the number of Arab women, most of whom are educated Christians, who choose to marry non-Arab Israelis.

Overall, this combination of a demographic imbalance in the size of cohorts and the increasing educational advantage of women will contribute to growing rates of male singlehood in Arab society. A substantial number of young Arab men who want to marry will not be able to find a wife, which will likely further deepen levels of social disengagement and violence. 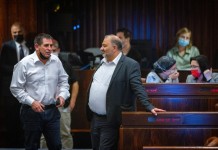