The director general of the Israel Institute for Biological Research (IIBR), Prof. Shmuel Shapira, on Tuesday told the Knesset Science and Technology Committee: “We have the ability and knowledge to develop a vaccine for all the citizens of the State of Israel. We are talking about a scope of 10-15 million doses.”

IIBR is an Israeli research and development laboratory under the jurisdiction of the Prime Minister’s Office, working in close cooperation with Israeli government agencies.


Prof. Shapira added that the Israeli vaccine will be ready for human trials in October, though it won’t be ready for phase 3 testing until next year.

The phases of clinical research are the stages in which scientists conduct experiments with a health intervention to obtain sufficient evidence for a process considered effective as a medical treatment. Phase 3 studies are randomized, controlled, multicenter trials on large patient groups (300–3,000 or more) and serve as the definitive assessment of how effective the drug is. Because of their size and comparatively long duration, phase 3 trials are the most expensive, time-consuming and difficult trials to design and run.

During Tuesday’s meeting of the Science and Technology Committee, chaired by MK Einav Kabla (Blue&White), Prof. Shapira also said: “On February 2, the Prime Minister instructed us to develop a vaccine and therapeutic antibodies for the citizens of the State of Israel, and since then we have been working around the clock to achieve this goal. It was a professional and correct decision. The only ability to plan and develop vaccines is in the Institute for Biological Research. We are the focus of knowledge and excellence in the world. We did not disappoint and delivered the product. No other body in the world has carried out the amount or scope of experiments on animals as we have, so we feel more secure. We didn’t take any shortcuts, we took the long path, so we have validation that the vaccine is efficient and safe.”

“From the first moment I [knew] that we [would] not be the first, and those who apparently beat us, we beat them in other things,” Prof. Shapira said. “I think that our goal is not to be the first, but to get a good vaccine for the citizens of Israel.”

“We hope that the second phase will be concluded towards the end of the year, the end of December,” he added.

Committee Chairwoman MK Kabla said, “We are all waiting with great anticipation for the big news about a vaccine that will begin to put an end to the complicated situation we are in, which has implications on every area of our lives.”

The IIBR’s success “is the hope of the entire nation of Israel,” she said. 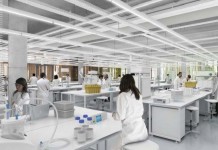