The coalition approved on Wednesday an amendment to the Construction Law that enables the connection of tens of thousands of illegal structures built by Bedouins and Arabs in the Negev and the north to the national electricity grid.

The bill, part of the coalition agreement between Prime Minister Naftali Bennett and the Islamist Ra’am party, passed with a slim majority of 61 Members of Knesset who voted in favor, and three obstained. The opposition boycotted the vote, citing illegal and undemocratic maneuvers employed by the coalition.

The amendment stipulates that the Minister of the Interior can sign an order that “it will be possible to connect a residential building located in a certain area, defined in the order, to electricity, water or telephone even without the existence of a building permit and completion certificate for that building.”

During the stormy and violent session, which included the hurling of insults and shouting, Prime Minister Bennett appeared to lose control, approached the opposition’s aisles and physically confronted members of the opposition, who shouted at him “shame” and “go away.” Bennett was visibly shaken and agitated. Knesset Speaker Micky Levy was forced to approach him and request that he disengage. 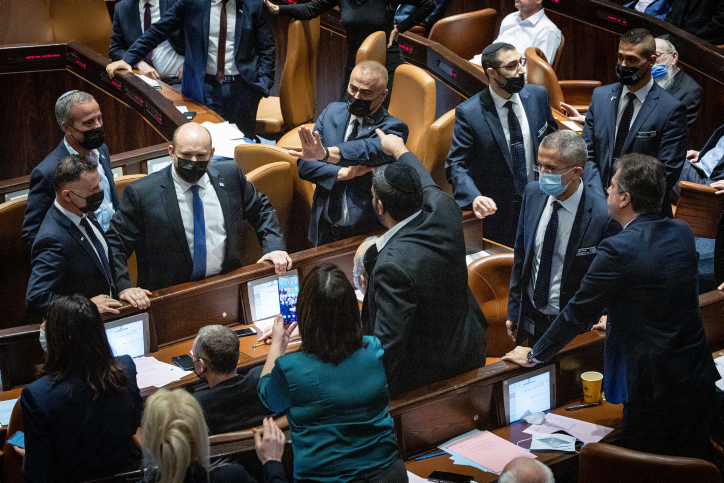 A section to the law that sought to enable access to electricity to Israeli structures built illegally in Judea and Samaria was voted down by Bennett’s coalition.

MK David Amsalem (Likud) stated that the bill “is an unconstitutional law, we will cut you off [Bedouins] from electricity when we return to power. We will insist that the lands of the state be returned to the state even if it includes a world war.”

During the discussion, Chairman of the Interior Committee MK Walid Taha (Ra’am) spoke in Arabic, which provoked the protest of the opposition.

MK Avi Dichter (Likud), who speaks fluent Arabic, told Taha that “if you were a decent man you would speak Arabic and then translate to 98% who do not understand you.”

MK Miki Zohar (Likud) said that “you brag in Arabic to your audience at home, this is an Israeli parliament established by the Jews.”

Former Prime Minister and Opposition Leader Benjamin Netanyahu declared the day as “a black day for democracy and Zionism.”

The bill “prepares for the Islamic Movement’s takeover of the Negev and the Galilee and fulfills a central pillar of the Palestinian plan to exercise the ‘right of return,’” he charged. “In the same breath, the Bennett-Ra’am government voted against our proposal to connect the young communities in Judea and Samaria to electricity.”

He further charged that “to pass the scandalous electricity law of the Islamic Movement, they broke the legislative process for the first time in the history of the Knesset and acted contrary to the position of the Knesset’s Legal Adviser. The Bennett-Ra’am government creates anarchy in the Knesset. Step by step it is trampling on Zionism and democracy.”

“Today, with the electricity bill, it has reached a new low in its dangerous subservience to the Islamic Movement while trampling on democracy. They will not silence our national opposition and they will not shut you up, citizens of Israel,” he vowed.

The Religious Zionist Party, of the opposition, stated after the passage of the bill that this is “a sad day for the State of Israel. They have given up on Zionism. They are handing over everything that is important and precious to us to the control of the Islamic Movement.”

“We in religious Zionism and in the entire national camp promise to return and correct. To get the State of Israel back on track. Raise the flag of Zionism again. To build and be built in the young and old settlement in the Galilee, in the Negev, and in Judea and Samaria,” it added.

The Regavim organization, which combats illegal takeover of state lands, has warned that connecting structures erected without a permit to the electricity grid will have the state losing one of its “most effective tools against the national epidemic of illegal construction.”

Meir Deutsch, Director General of Regavim, differentiated between categories of structures, noting that there is a certain degree of logic in approving electrical connections for structures for which the government intends to approve permits – but “not a wholesale whitewashing of illegal construction.”

“Structures that lack permits should meet basic criteria; otherwise, chaos will ensue and the government will lose its last remaining tool for preventing illegal construction and avoiding the complete breakdown of planning and land-use policy,” he warned.

Gush Etzion Regional Council Head Shlomo Ne’eman stated after the vote that “this is a terrible day, in which a horrible anti-Zionist law was passed, giving preference to Bedouin law-breakers who try to undermine the Jewish State, at the expense of young Jewish pioneers who are heroically fighting the State’s battle over the protection of its lands.”