As one gets older, one notices that every Passover Seder one repeats about the same notions one picked up from one’s betters at specific spots along the night, while one’s family doesn’t seem to mind. So one starts wondering if anybody has been listening all these years. In any events, here are the key “chidushim” (innovations) yours truly feels compelled to repeat every Seder, in the hope that writing them down would reduce the chance of forgetting them with the passing years. Feel free to impose them on your own loved ones.

1. Yachatz (take the middle matzah and break it into two, one piece larger than the other. The larger piece is set aside to serve as afikoman. The smaller piece is put back, between the two matzot).


The sound of the breaking matzos reminds us of the first noise we are exposed to when we emerge from the womb, from a perfect environment where everything is designed specifically for us to a loud and bright, frightening place where nothing is predictable and we are utterly alone. This is the human condition, which our tradition has given us the ultimate tool with which to struggle with its repressive isolation – submitting to God’s will through the commandments helps us become free from our egos and available to our fellow human beings.

2. This is the Bread of Affliction.

These opening lines of the Haggadah were composed when the defeated refugees from fallen Judea were being herded to Babylon in 597 BCE. As we were driven away from our promised land, we were wondering, was this the end of the experiment? Has the redemption of our Exodus been erased and we were now destined to become eternal slaves? In response, our sages lifted the Matzos which had a dual purpose in our history: they were the cheap food of the slave that filled up our stomachs quickly, keeping us alive for the next day of harsh toil; but they were also the food of freedom when we baked them hastily to be able to run out of Egypt. Therefore, this bread of affliction we eat reminds us that we may be slaves today, but come next year we will surely be redeemed. We are not eternal slaves.

The Torah mentions four times the idea that, when your child asks you tomorrow, what’s it all about, answer him or her, God has delivered us with a strong arm from Egypt. The Exodus is the foundation of our relationship with the Creator, and so, for each Torah verse telling us what to answer our children, we have our children ask one question, four altogether.

This passage begins the Talmudic study of the rules of Passover and the Seder night. Since the Haggadah has just told us that in discussing the Exodus from Egypt, the longer we do it the better, we want to understand – does this mean that we can stretch out the seder for days and days? So, we are told that these five distinguished rabbis were studying the Exodus all night until their students came and told them: “Our Masters! The time has come for reciting the morning Shema!” Meaning that there is a limit for the Mitzvah of reciting the Exodus, and that limit is the next time-related mitzvah – the Shema.

At this point, I always mention that the five rabbis in the story were all involved in the recent sacking of Rabban Gamliel, the Prince of the Jewish community in Judea, because of his hard-handed treatment of his subjects, most notably Rabbi Yehoshua (Berachot 27:). They preferred to replace him with Rabbi Elazar ben Azaria, even though he was only 17, because he had the best yichus (pedigree), the tenth generation from Ezra the Scribe. And according to legend, overnight his hair turned white and he looked old, which is why he says, “I am like a man of 70) and not, “I am a man of 70.”

5. The four sons, like the Ma Nishtana, are based on the four verses dealing with our children asking us tomorrow about the Exodus. In this commentary, each verse refers to a different kind of son. Here are my two favorites:

The wise one, what does he say? “What are the testimonies, the statutes, and the laws which the Lord, our God, has commanded you?” You, in turn, shall instruct him in the laws of Passover, ‘one is not to eat any dessert after the Passover-lamb.’

The wise son approaches our tradition from a purely intellectual angle: testimonies, statutes, and laws. But we teach him that our Judaism is also sensual: it’s also about music, and sights, and smells, and tastes. The Passover lamb is the meat of freedom: on God’s command, when the god Aries dominated the zodiac, we tied up lambs for three days in the heart of idol worshipping Egypt – which would be like tying up a cow in the middle of New Delhi. Then we slaughtered them, smeared their blood on our doorposts, roasted them whole––for every Egyptian to see what we’re doing to their god––and ate it. It was the meat of holy chutzpah, and it tasted like freedom. And that taste must not be diluted with the taste of dessert.

The wicked son, what does he say? “What is this service to you?!” He says “to you,” but not to him, excluding himself from the community. You must blunt his teeth and say to him: “It is because of this that God did for me when I left Egypt,” for me and not for him. If he had been there, he would not have been redeemed.

The wicked son is not wicked at all. He is desperately lonely, isolated, and, most clearly, self-loathing. What we must do for him is blunt his teeth so he won’t be biting himself so painfully, and show him that by simply joining the rest of us at the seder, he is included. And here I change the tone of the punch line: Do you really think that for his low self-esteem, had he been in Egypt he won’t have been redeemed? Come on…

6. Go forth and learn what Laban the Aramean wanted to do to our father Jacob.

The Haggadah is asking a very good question: when there was a famine in Canaan, and Jacob and his sons were forced to go down to Egypt, thus starting the path to slavery, why didn’t they go instead to Syria, where their wealthy family had been living in great prosperity? Because that option was no longer available to them. Back when Jacob and his wives and children and cattle and sheep left Grampa Laban’s home to go home to Canaan (Gen. 31), Laban chased after them and wanted to kill all of them, but was afraid that God would punish him. So, instead, they erected a stone monument, which Jacob named Yegar Sahaduta – a testimony of fear in Aramaic – because Laban was a great wizard, and all of Jacob’s children knew that if they dared cross that boundary, the wizard would kill them.

7. These are the Ten Plagues that the Holy One, blessed be He, brought upon the Egyptians.

The Haggadah brings several versions of the mathematical value of the plagues of Egypt, which according to tradition have to do with the promise )Ex. 15-26): “If you will heed your God diligently, doing what is upright in God’s eyes, giving an ear to God’s commandments and keeping all of God’s laws, I will not bring upon you any of the plagues that I brought upon the Egyptians, for I God am your healer.” In other words, the more plagues we count in Egypt, the fewer would be inflicted on us.

Why the difference? Rabbi Akiva counts “fierce anger” as one of the five expressions of divine temper against the Egyptians; but Rabbi Eliezer, who was famous for his persistent, fierce anger, to the point where all the other sages feared him to death (literally), was impervious to this divine quality, the way a fish isn’t aware of water.

8. If He had brought us before Mount Sinai and had not given us the Torah Dayenu, it would have sufficed for us.

All the other verses in the Dayenu song make sense – had He given us one thing but not the other, we’d still have that one thing, so we’re happy. But to schlep us to Mount Sinai, in the heat and the sand and all the rest of the inconvenient wilderness stuff and end up not giving us the Torah – Dayenu?

The most beloved Jewish commentator of all times, Rashi (1040-1105), explains the verse (Ex. 19:2): “And there Israel encamped against the mountain,” saying it was “As one man with one heart.” This was a gift only God could give us, becoming one mind, completely connected to one another, aware of our deepest thoughts, our stories, our hidden fears, and shy loves. Indeed, if that was all that we received there, at the foot of the mountain, it would certainly have been more than enough. A huge Dayenu.

And a huge and happy Passover Seder to all the children of Israel of all ages. 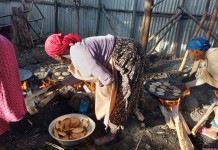 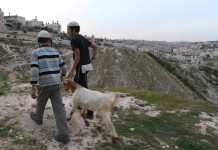