Polish Prime Minister Mateusz Morawiecki on Monday declared his country will not attend the Visegrád Group summit in Jerusalem, because freshly-appointed Israeli foreign minister Yisrael Katz said the Poles “collaborated with the Nazis” and quoted late prime minister Yitzchak Shamir, whose father perished in the Polish Holocaust – the Poles “suckled on anti-Semitism with their mothers’ milk.”

As we are always aghast at the capacity of the Poles to deny their role in the campaign to annihilate the Jews – which is tantamount to outright Holocaust denial – it’s difficult for us, in the context of a news report to amass the millions of bits of evidence proving the murderous zeal of our former neighbors in every town and city in that cursed land.

Instead, we picked but a few paragraphs that were reported by one Calel Perechodnik, a young Polish Jew from a small town near Warsaw, who put it so eloquently (we thank the Jewish Virtual Library):

“I would like to characterize the attitudes of Poles toward Jews and, in general, toward the acts of extermination of Jews. The lower classes of the townspeople as well as the peasants oriented themselves to which-ever way the wind was blowing. They understood that they had an opportunity to enrich themselves, one that came only in a great while. One could pillage without penalty, steal, kill people, so that many using the slogan “now or never” got to work. They raised their hands to heaven, thankful for the favor that they had lived to see such times… They considered themselves innocent. After all, the Germans were responsible.

“In every town where there was an Aktion, the ghetto was surrounded by a mob that participated in a formal hunt on Jews, a hunt according to all the rules of hunting—with beaters or without them. Did many Jews perish at their hands? Countless ones! In the best case, the beaters took money from Jews, resigned to lead them only to the gendarmes. It was in any case a sentence of death. What could the Jew do without money? He could go to the gendarme himself and ask for a bullet. I myself saw and heard from the mouths of Poles about such cases.

“Our janitor, Jan Dabrowski, caught Jews by force and delivered them into the hands of the gendarmes after first robbing them. The mob acted in unison, the nameless mob. When the conductors on trains noticed a Jew, they communicated to one another, ‘I caught a bird.’ A bird naturally had to be ‘plucked of its feathers.'”

At long last, Mr. Morawiecki, have you no shame? 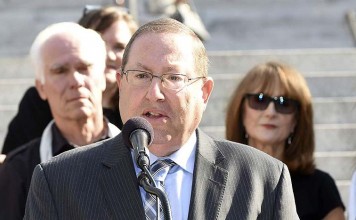