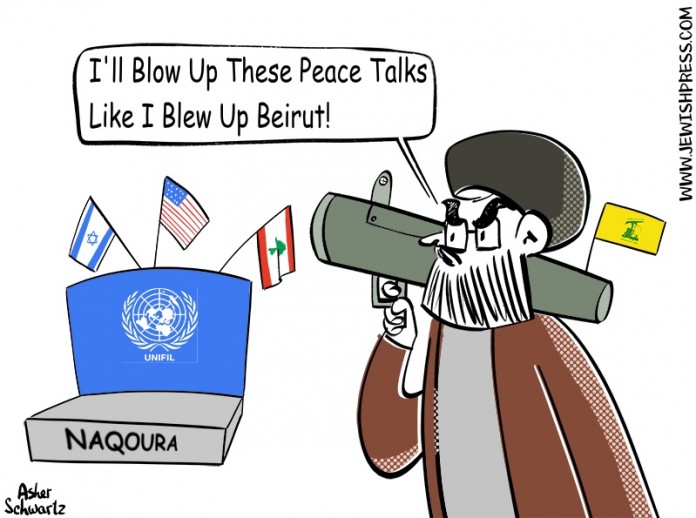 Hezbollah’s Secretary-General Hasan Nasrallah has threatened to attack Israel for the third time in recent weeks and warned Israel that the Jewish state “will not be able to extract gas from the Karish field in September before Lebanon obtains its right,” underscoring the Hezbollah’s missiles “can hit any Israeli target at sea or on land.”

In recent years, the two countries held talks, mediated by the US and hosted by the Office of the United Nations Special Coordinator for Lebanon (UNSCOL) at Rosh Hanikra. Amos Hochstein, the Biden administration’s Special Envoy for International Energy, is currently serving as mediator.

Israel has recently commenced actions to develop the Karish gas field in the area, and Hezbollah is now threatening war by September.

Nasrallah spoke to Al-Mayadeen on Monday to celebrate the 40th anniversary of the terror organization’s establishment and declared that “when things [negotiations] reach a dead-end, we will not only stand in the face of Karish… Mark these words: we will reach Karish, beyond Karish, and beyond, beyond Karish,” threatening all of Israel’s gas fields.

“[Targeting] Karish or beyond depends on the Israeli enemy’s decision along with that of the United States,” he said.

“If the extraction of oil and gas starts in September before Lebanon retains its rights, we are heading toward a confrontation,” he said. “We have set a goal that we will seek to achieve no matter what, and we will resort to anything to this end.”

Nasrallah made similar threats last week and the week before that, declaring that “if Lebanon is prevented from extracting its maritime resources, Israel will not be able to sell gas and oil.”

He pointed out that in September, Israel will start extracting gas and oil from Karish, “which will make it so hard for Lebanon to restore its rights. If you do not prove your rights before September, things will be costly after this deadline.”

“War [with Israel] and martyrdom are better than death from hunger and during civil brawls at bakeries and gas stations [in Lebanon],” he declared.

During the Monday interview, Nasrallah further said that Israel’s destruction will not take another 40 years

“I see that the demise of the Israeli entity is imminent,” Nasrallah stressed, “Israeli settlers will be seen leaving through airports, seaports, and border crossings. We will not need another 40 years to witness the demise of Israel.”

“All the elements allowing Israel to survive are diminishing and dwindling while the elements that will lead to its demise are growing stronger,” he added.

Hezbollah has already attacked the Karish rig twice. On June 29, the IDF intercepted a Hezbollah drone on its way from Lebanon toward the Karish gas field, situated off Israel’s northern shore. A few days later, Hezbollah dispatched another three drones toward the gas field. The three were interpreted by the IDF. Israel has yet to respond to any of the attacks.

Israeli Defense Minister Benny Gantz toured Israel’s border with Lebanon last week with Prime Minister Yair Lapid and senior IDF officers and stated that Israel is “ready to do much for its neighbors’ prosperity and is prepared to take action at any time to protect its citizens. We are prepared in all areas – land, sea, air and cyber. We see the crisis in Lebanon, which is hurting its citizens.”

Israeli forces in the north are on high alert following several attempts by Hezbollah to attack Israel’s Karish gas rig, situated off its northern shore.

Yossi Yehoshua, the military commentator for the Yedioth Ahronoth daily, reported Tuesday that the IDF’s assessment is that Nasrallah will not attack Israel over the gas rig, but noted that he has issued these threats repeatedly, that the intelligence estimates are not always accurate, and that “Hezbollah is not Hamas and we need to prepare for the worst scenario.”