Iran’s nuclear chief on Tuesday announced that the country is building a new production hall for advanced centrifuges near its Natanz nuclear site.

The new hall would replace a production hall that experienced a fire in July in what Iran has alleged was sabotage, though it didn’t place blame on anyone or any country.


The Islamic Republic has also said that the damage done to the facility was significant and could delay the development of advanced uranium enrichment centrifuges.

“Due to the sabotage, it was decided to build a more modern, larger and more comprehensive hall in all dimensions in the heart of the mountain near Natanz. Of course, the work has begun,” said Ali Akbar Salehi, according to state TV. 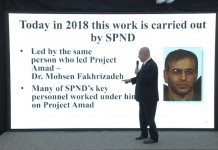 Goldstein on Gelt: Do Your Financial Values Define Who You Are?