It appears that the two massive explosions that sent a mushroom-like cloud of white smoke into the sky above the Port of Beirut, followed by other clouds of varying colors — including one of mottled reddish-brownish-orange — were likely caused in part by the detonation of ammonium nitrate that was stored in a warehouse in Hangar 12.

The massive explosions that killed at least 73 people and injured more than 3,700 others Tuesday evening in the Port of Beirut was caused by “materials that were stored at the port,” according to Lebanon’s General Security Director-General Major-General Abbas Ibrahim, who spoke with the LBCI news organization Tuesday evening about the disaster.


The high ranking security official was referring to “highly explosive sodium nitrate,” a chemical that had been confiscated from a ship more than a year ago and was placed in one of the warehouses at the port, according to an Arabic-language news bulletin published by LCBI. The sodium nitrate was assumed to be damaged and inert, but clearly was not, the news outlet added.

It’s not yet clear how the chemicals were detonated, nor whether there were other reasons for the two explosions that took place.

However, the ammonium nitrate has been sitting in the warehouse for at least 12 years. It is highly flammable and without the proper storage and ventilation, under certain temperatures and concentration, ammonium nitrate can indeed explode.

Under the guidance of the @Israel_MOD and @IsraelMFA, Israel has offered to send humanitarian & medical assistance to Lebanon via security and international channels.

This is the time to transcend conflict. pic.twitter.com/tUvGFTGBeR

It was precisely for this reason that the Israeli residents of Haifa became so adamant in pressuring the Haifa Chemicals company to relocate the mammoth storage container in which it had kept its supply of ammonia for decades, located in the Port of Haifa.

Nasrallah mentioned the ammonia tank in Haifa as one of the targets he could hit in Israel’s northern sector; it was warned the tank could turn into an inferno under a barrage of Hezbollah rocket fire.

Finally, in 2017 the ammonia tank in Haifa Bay was closed down after countless legal battles and the publication of a report that said a Hezbollah missile strike on the tank could results in the deaths of thousands.

A professor at Haifa’s Technion Israel Institute of Technology warned that an attack on vessels delivering supplies to the ammonia tank in the port could kill “numbers that are inconceivable in any apocalyptic scenario ever described by the security establishment of the State of Israel.”

When all is said and done, however, the ammonia tank in Haifa Port stored only 1,670 tons of the liquid chemical; the warehouse in which the ammonia nitrate was stored in the Port of Beirut reportedly held approximately 2,700 tons of the chemical at Gate 12.

As Neurology Professor Reza Behrouz commented in his post on Twitter, “What is a 2,700 ton depot of ammonium nitrate . . . doing in Beirut if not owned by Hezbollah to be used to wreak havoc? [Ammonium nitrate] was also utilized in the 1995 Oklahoma City bombing.” (Ed. note: In fact, just two tons of ammonium nitrate was required for that horrific bombing.)

What is a 2,700 ton depot of ammonium nitrate (NH₄NO₃) doing in #Beirut, if not owned by #Hezbollah to be used to wreak havoc?
NH₄NO₃ was also utilized in the 1995 Oklahoma City bombing. #BeirutBlast #بيروت pic.twitter.com/GxmMCG3cVA

Huge Mushroom Cloud, Like the Aftermath of 9/11
The blasts rocked Beirut, shattering glass, pummeling buildings into rubble and ripping the balconies from those that remained, Lebanon’s Health Minister, Hamad Hassan said, in a manner that looked hauntingly similar to that of downtown Manhattan shortly after the September 11, 2001 “9/11” attack on America by the Al Qaeda terror organization.

Billows of white smoke rose in a huge mushroom cloud followed by smoke that turned grey and black in heavy waves above Beirut Harbor; a dark mottled orange column of smoke was seen rising shortly after.

Thick smoke filled the streets of the city center as Lebanese citizens wandered about covered in dust and some with ripped clothing, dazed and stained with blood as they tried to make sense of the world around them.

According to Joseph Al-Qusifi, editor-in-chief of the Lebanese newspaper An-Nahar, the building of the news outlet was also badly damaged by the explosion. At least 15 of the staff at the paper were injured in the disaster, he said.

Prime Minister Hassan Diab announced that Wednesday, August 5 is declared a national day of mourning for the victims of the explosion at the Port of Beirut. 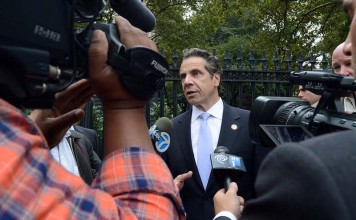 Cuomo Killed Thousands of Seniors and Lost a House Seat