The Knesset’s Education, Culture, and Sports Committee held a heated debate on Monday on the topic of “Freedom of expression, incitement and violence on campuses,” following the latest pro-Palestinian and anti-Israel events at universities.

Israeli universities have recently seen a series of events lamenting Israel’s existence by marking the Nakba, attacks on Israelis waving Israelis flag, marches with PLO flags, calls for terrorism during student protests, calls for revenge, and calls for another Intifada.

Member of Knesset (MK) Kathrin Shitrit stated the PLO flag “is an expression of the aspiration to eliminate the State of Israel. People talk about the principle of reciprocity. Can I walk around in Ramallah with an Israeli flag? No.”

Arab MK Samy Abu Shahadeh was removed from the room following a heated exchange with MKs Orit Strock and Shitrit. Abu Shahadeh said that he was recently at Tel Aviv University for a ceremony for the Nakba, when Israeli students staged a counter-event with Israeli flags “to celebrate, and that is far more than can be tolerated under freedom of speech. It attests to a mental illness,” he said of the Israelis.

A student from Tel Aviv University, Orit Eliyahu, told the meeting’s participants that Jewish students “are going through a very difficult period. There are people who live with me in the dormitories and decided to return to living with their parents because they’re afraid.”

“Raising a PLO flag, an enemy flag, has become a routine thing, but it’s frightening to raise an Israeli flag. On Yom HaZikaron (Memorial Day), the Arab students laughed at us for standing still during the [memorial] siren. Arab students who sit with us in lectures tell us that they want to murder us, and a day afterward they sit next to us in the lecture hall. We’re trembling with fear,” she shared.

Arab student Aline Nasra said she came to “raise the outcry of Palestinian Arab students who suffer from harassment of right-wingers and meet with a deafening silence from the university administration.”

She claimed that over the past two weeks, she has suffered from “unbridled incitement online and on campus, just for expressing a legal political opinion.” She alleged that there were “activists near our dormitories who called ‘Death to the Arabs.’” She refrained from answering MK Sharren Haskel’s question of whether “Death to the Jews” was a legitimate call or not.

MK Itamar Ben Gvir said that he receives almost every week pictures from universities of “people shouting against the Jews and raising flags of a terrorist organization. Walking there feels like in Ramallah. To the student who calls herself a Palestinian, I say: Leave. It can’t go on this way.”

Haskel commented that “when students turn to the committee and say that they’re afraid to enter the campus, and ask to learn via Zoom for fear of their personal safety, something here is not working. Saying ‘with blood and fire we will redeem Palestine’ is incitement to violence. It’s suddenly become permissible on campuses to shed the blood of Jews. The events of the past week have crossed a red line, and it’s unacceptable.”

“For years, firm enough action hasn’t been taken against inciters, and apparently this is the reason they continued to test the boundaries. I watched the video from the Nakba demonstration in Tel Aviv University, and she [one of the students] was called a national hero for ‘daring to raise’ an Israeli flag on the campus. I was shocked. What have we come to, that a national hero is someone who walks around with an Israeli flag on campus,” she demanded.

Elchanan Felhaimer, Chairman of the National Union of Israeli Students, shared that in the past two weeks, students have contacted them from all over Israel, “saying that they feel threatened and are afraid to come to class. We heard about institutions that didn’t permit students to enter with an Israeli flag. We want to find out who gave the instructions and have disciplinary measures taken against them.”

Shai Rosengarten, a representative of the Im Tirtzu Zionist movement, told the committee that in the past months, they have seen “a considerable increase in acts of terrorism and incitement on campuses. The initial encounter is almost always by the students, not by the administration. Regrettably, we don’t see persistent and concrete action to prevent events of this kind.”

He said a hotline should be established for calls from students who feel threatened. Furthermore, all discipline bylaws should include a prohibition on incitement and calls for violence.

MK Orit Strock pointed to Law No. 17 of the Palestinian Authority’s book of laws which states that anyone who carries out terrorist attacks against the Jewish people will be compensated according to the “quality” of the attack they perform.

“Until this law is repealed, they are no less hostile than Iran, and their flag cannot be raised in Israel, and on campuses in particular. We should find out whether the Minister of Education and the Education Committee have the ability to take action against the inciters. The university heads pay no attention to us. They didn’t even show up here,” she said.

“The PLO flag is a hostile flag, and when it is raised along with incitement calls—this is a violation of the Counter-Terrorism Law. We are asking the Council for Higher Education to issue a legal letter that will clarify to the university heads that when they allow this, they are violating the Counter-Terrorism Law. Students, if you’re barred from raising the Israeli flag, please report it to us,” she concluded. 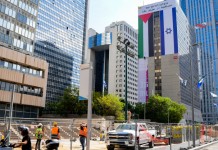