An Israeli Border Policeman was lightly injured on Tuesday night during a counterterrorism in the village of Abu Dis, near Jerusalem, during which a terror suspect was apprehended.

Acting on information from the Shin Bet security, the Special Forces arrested a suspect in terrorist activity in Abu Dis, amid violent disturbances.


As part of the riots, terrorists threw Molotov cocktails, stones, marble slabs, and heavy objects, and poured gallons of oil on the security forces from the roof of a mosque, endangering the lives of the troops. Also, dozens of rioters blocked roads and threw explosives at the forces.

The security forces responded with live fire and used means for dispersing demonstrations. They chased away the rioters, who fled, and during searches of the roof of the mosque they found marble slabs, roof tiles, and a backpack containing materials for making Molotov cocktails and explosives.

One soldier was slightly injured in the palm of his hand as a result of a rock and was referred for medical treatment at Shaare Zedek Medical Center.

The mission was completed by the soldiers who arrested the suspect and handed him over to the Shin Bet for questioning.

Earlier on, near the city of Shechem (Nablus) in Samaria, IDF forces securing a checkpoint shot and seriously injured an Arab who approached them and did not heed their calls to halt. The incident is being investigated, the IDF said. 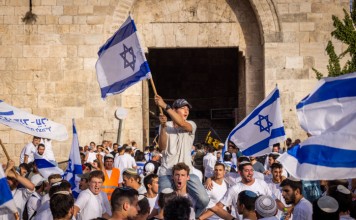