Congresswoman Ilhan Omar (D-Min), on Wednesday announced she had joined the newly formed Congressional Caucus on Black-Jewish Relations. Omar tweeted: “Last month, [Rep. Jan Schakowsky (D-Il)] and I joined together to talk about the common threat of white nationalism faced by Muslim, black and Jewish-Americans. Glad to see colleagues follow through in working on the things that unite us and not divide us.”

Last month, @janschakowsky and I joined together to talk about the common threat of white nationalism faced by Muslim, black and Jewish-Americans. Glad to see colleagues follow through in working on the things that unite us and not divide us ??https://t.co/KxGV0lnnGI https://t.co/ylJTjmjnxk

Schakowsky, 75, née Janice Danoff, the daughter of Jewish immigrants from Lithuania and Russia, has represented Illinois’s 9th district in Cook County for 20 years. She is among the most Progressive members of Congress and a member of the Congressional Progressive Caucus. Liberal and progressive interest groups often give her ratings of 90 to 100.

In March 2015, Schakowsky boycotted Prime Minister Benjamin Netanyahu’s speech to Congress because, as she wrote in the Huffington Post, “it could scuttle delicate negotiations with Iran.”

In March 2015, Schakowsky said at a J Street event that senior-editor-at-large for Breitbart News Joel Pollak was a “Jewish, Orthodox, Tea Party Republican.”

So, all in all, a fine pick to represent US Jewish politicians in a new solidarity group with Congresswoman Omar, whose command of classic anti-Semitism is impressive for an east-African Muslim.

About which Omar was quick to clarify: “Just to be clear, my endorsement of the caucus and willingness to unite our communities against the threats of White supremacy isn’t an endorsement of Zeldin’s bigotry!”

Lee Zeldin, one of the few surviving Republicans in NY State, is on the record as saying that Israel is “America’s strongest ally” and that Congress must “protect Israel’s right to self-defense.” In 2016 he spoke in support of the anti-BDS legislation that passed the New York State Senate. In March 2017 he co-sponsored a bipartisan bill in the House of Representatives, the Israel Anti-Boycott Act, to oppose boycotts of Israel and “to further combat the anti-Israel boycott, divestment and sanctions (BDS) movement.” He supported the Trump administration’s decision to relocate the US Embassy in Israel from Tel Aviv to Jerusalem in May 2018 as part of the United States recognition of Jerusalem as capital of Israel.

So, of course, a bigot, through and through…

Omar’s “clarification” that should the new Black-Jewish caucus ever dare to support Israel, she would be off-caucus, did not stop Congresswoman Debbie Wasserman Schultz (D-Fl) from tweeting her joyous response: “So thrilled to announce this with @RepLawrence & @RepLeeZeldin. African American and Jewish communities have a shared history of confronting discrimination & racism. White supremacy threatens both our communities, and the Caucus will build on our common fight for a better world.”

And so, Jewish Congressional Democrats who failed to sanction the raving anti-Semite from Minnesota have decided to join her instead.

The most jarring part about this new caucus is that Congresswoman Debbie Wasserman Schultz, who had been active while still on the Hillary Clinton campaign in keeping Bernie Sanders’ band of anti-Zionist lunatics such as James Zogby from framing an anti-Israel party platform – is now collaborating with the bad guys. Ouch. 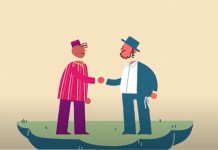 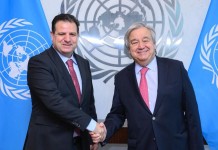