The Latino Coalition for Israel is calling on U.S. President Donald Trump to back Israel’s efforts to extend sovereignty over parts of Judea and Samaria.

Bramnick praised the Trump administration’s previous directives regarding Israel, including moving the embassy from Tel Aviv to Jerusalem, recognizing the Golan Heights and withdrawing from the 2015 Iran nuclear deal. He also commended U.S. Secretary of State Mike Pompeo’s announcement last year that clarified the U.S. position that Israeli settlements are not a violation of international law.

“Recognizing Israeli sovereignty over Judea and Samaria, therefore, is the natural progression of the Trump administration’s Israeli policy and will allow the administration to be remembered for restoring God’s people to His promised land,” said Bramnick.

Israeli Prime Minister Benjamin Netanyahu has made it a priority to extend Israeli sovereignty to parts of Judea and Samaria, as well as the Jordan Valley, under Trump’s “Peace to Prosperity” peace plan that was unveiled at the White House in January.

However, it remains unclear what Netanyahu’s timetable for the sovereignty move will be.

In the last several months, the United States and Israel have been working on a joint mapping committee tasked with drawing up specific parameters. The United States has signaled that it’s up to Israel when it decides on the issue, though there have been reports of disagreements and even concern between the two countries on the timing of the move, as well as concerns related to the ongoing coronavirus pandemic. 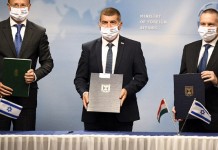