Yisrael Gantz, head of Benyamin Regional Council, met recently in Washington with dozens of Senators and Congressmen on both sides of the aisle, and Democratic representatives have said that they intend to turn to President Joe Biden to change the decision regarding the reopening of a US consulate Jerusalem designated for Arabs Affairs (the Palestinian Authority).

Acting on an elections promise, the Biden administration intends to reopen its consulate on Agron Street in western Jerusalem that will provide services to Arabs in the area. Israel has expressed opposition to such a move.


The establishment of the US Consulate that will serve the residents of the Palestinian Authority is provoking political controversy in Israel, and Democratic lawmakers have likewise expressed criticism of this move.

Gantz has been in the US for the past few days to counter what he defines as “an alarming trend to promote the possibility of establishing two states in the near future.”

Gantz met with some 60 Republican Congressmen and stressed that the promotion of the two states’ solution and the establishment of “Palestine” would “harm Israel and the US.”

The surprise came during his meeting with members of the Democratic Party, some of whom sided with the criticism of the American intention to set up a consulate for the Palestinian Authority in Israel’s capital.

Gantz explained that “there is an understanding that this move harms Israel’s sovereignty in Jerusalem, and also harms American sovereignty after the relocation of the embassy was in fact a declaration of Jerusalem as the capital of Israel.”

A number of Democratic representatives have stated that they intend to act in the coming days and raise the issue with Biden in a number of ways, imploring him to reconsider the decision.

“This is an extraordinary step of domestic criticism of the American president regarding his policies on Israel,” Gantz explained Sunday.

Gantz said that “we found friends among the Democrats who do not agree to weaken the State of Israel and believe that investment in infrastructures such as roads and electricity in Judea and Samaria should be increased significantly for the benefit of both populations. We talked about the basic needs of life and found that there was a lot of agreement.”

Gantz also discussed the issue of the Palestinian Authority’s takeover of Judea and Samaria with the support of the European Union.

US ‘Remains Committed’ to Opening Consulate To Palestinian Authority in Jerusalem 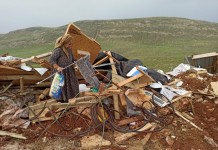