Russia has made clear through its actions — and its words — that its invasion of Ukraine is no defense operation, but rather, a war of “territorial conquest,” US State Department spokesperson Ned Price declared Tuesday at a briefing with reporters in Washington DC.

Before Russia launched its invasion on February 24, Price said, “we heard consistently the lie from various Kremlin officials that this was about some perceived ‘threat’ from Ukraine, from NATO, from the United States,” statements US officials called “lies” from the start.

“Since then, but especially in recent days, the Russians have been doing as good a job as anyone of debunking their own disinformation and their own lies,” Price said.

He repeated a statement made by Russian Foreign Minister Sergei Lavrov on Monday, in which Lavrov called President Volodymyr Zelensky and his government in Kyiv “an unacceptable regime.”

The statement, said Price, made clear that “this was not what Russia purported it to be.”

In an interview last week with Ria Novosti and RT, Lavrov said the transfer of Western weapons to Ukraine has changed the landscape.

“At the time of the meeting of negotiators in Istanbul, there was one geography, and our willingness to accept the Ukrainian proposal was based on that geography, the geography as it stood at the end of March 2022,” Lavrov said.

“Now the geography is different. This is far from being only the DPR (Donbas) and LPR (Luhansk). It is also the Kherson region, the Zaporozhye region and a number of other territories, and this process continues, and continues consistently and persistently.”

But Price emphasized that Russia’s geographical goals are being set at a higher level.

“It hasn’t just been Foreign Minister Lavrov. It wasn’t all that long ago, as Secretary [Antony] Blinken has pointed out on a couple of occasions now that President [Vladimir] Putin spoke, comparing himself to Peter the Great,” Price noted.

The spokesperson reminded reporters of what Putin said last month (June 9) after a visiting an exhibition dedicated to the tsar on the 350th anniversary of his birth.

What Putin said specifically about Peter the Great, as seen in the above video of his remarks, was this: “It seemed he was at war with Sweden, he took something from them. He did not take anything from them, he returned [what was Russia’s]… Well, it seems it has fallen to us to take back and strengthen [territories] and if we take these basic values as fundamental to our existence we will prevail in solving the issues we are facing.”

“Repeatedly, Russian officials have put to the lie just about everything that we heard from them prior to the invasion,” Price observed.

“They have made clear in doing so this is not a defensive operation. This is, in fact, what it always appeared to be, and that is a war of territorial conquest.”

Price said Russia’s plainly stated geographical goals are “why it’s so important that countries around the world stand not only with Ukraine to help it defend its sovereignty, its territorial integrity, its independence, but also to stand with the rules-based international order that for decades now, since the end of World War II, has made clear that we cannot reside in a world where might makes right, where large countries can bully the small ones, where a country’s foreign policy can be dictated by any other country.”

The only problem is that what’s good for the goose seems irrelevant to the gander, particularly when the double standard is applied to Israel.

The United States consistently attempts to dictate suicidal policies to Jerusalem about the voracious terrorist entity urging its people to murder their Jewish neighbors while constantly violating Israel’s sovereignty. Moreover, the Biden Administration is joined in its fervent support of the Palestinian Authority by multiple European nations, Canada — and Russia.

But that’s another story… 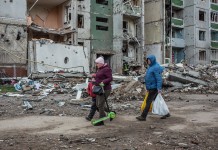 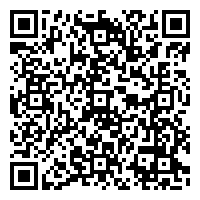