Who said beggars can’t be choosers? You would have expected the president of a country in risk of losing financial support to the tune of between $2 and $5 billion to approach his first visit to his benefactor’s home with appropriate humility – hat in hand would be nice, a lowered stare, some discernible respect.

If that’s how you thought Egypt’s new Islamist president, Mohamed Morsi, would appear on the eve of his coming visit to New York City, you were mistaken.


Instead of stressing his friendship and loyalty to a country which, despite its own economic woes, is generously helping to feed his 80 million plus citizens, Morsi is actually lecturing the United States, saying it needs to “fundamentally change its approach to the Arab world, showing greater respect for its values and helping build a Palestinian state, if it hoped to overcome decades of pent-up anger.”

For the record, since 1979, an annual contribution which totals, give or take, $30 billion has yielded the United States “decades of pent-up anger.”

If they came to me, I could have gotten them the same pent-up anger for less than half that cost…

Morsi is defying the boundaries Chutzpa in his NY Times interview on Saturday. And it appears the Times was taking it all in, hook, line, sinker, worms, stinking fish, you name it.

“He said it was up to Washington to repair relations with the Arab world and to revitalize the alliance with Egypt, long a cornerstone of regional stability,” summarize reporters David D. Kirkpatrick and Steven Erlanger.

Yes, the U.S. used to depend on Egypt for regional stability, but that was when a certain President Hosni Mubarak would crack the whip to keep America’s enemies (including Morsi) behind bars, and the Palestinians in line. That cornerstone has gone the way of the Shah of Iran, replaced by a regime with better ties with Iran and Hizbollah than with Washington or, God forbid, Israel.

Responding to hushed complaints from the State Dept. and the White House that his government had waited 48 hours while the mobs were charging and scaling the walls of the American embassy and burning the American flag, Morsi said “We took our time” in order to avoid an explosive backlash.

There was nothing spontaneous about those demonstrations, just as there was never any doubt that they were being permitted to flame up just so much. If the mobs stayed 48 hours outside the embassy it’s because they were told to stay; if they didn’t penetrate the embassy perimeter it’s because they obeyed directives; Morsi first had to send a message to the Americans, and then, when he was good and ready, he ordered the mobs dispersed.

The message was: Egypt is a tinderbox of repressed anti-American hatred and only I, Mohamed Morsi, can stop it – should I see fit to do so.

Cornerstone, shmornerstone, what Morsi is delivering are threats, unabashed, open faced and lethal. He is telling the U.S. that without him, its Mid-East assets will go up in flames. He can be likened to the mobster who walks into a businessman’s office and apologizes profusely for dropping an expensive vase on the floor. What a shame if more things get broken, right?

Then, naturally, there’s Israel. Morsi “argued that Americans ‘have a special responsibility’ for the Palestinians because the United States had signed the 1978 Camp David accord. The agreement called for the withdrawal of Israeli troops from the West Bank and Gaza to make way for full Palestinian self-rule. ‘As long as peace and justice are not fulfilled for the Palestinians, then the treaty remains unfulfilled,’ he said.”

You got it? In effect, there is no longer an Egyptian obligation to honor the peace treaty with Israel, because Israel has not fulfilled its obligation under the treaty – not to Egypt, there even Morsi would admit every last morsel of land has been returned to its former owner – but to a third party.

This means that, from this point forward, any Israeli attempt to enforce the mutually binding peace agreement with Egypt could be met with a boldfaced refusal.

This would include the heavy armor Egypt has been bringing into the Sinai, in violation of the peace treaty, and which it takes back, for now, following Israeli and American pressure.

At some point – in the very near future – the Egyptians will insist on maintaining a regular military force in the Sinai, tanks and artillery included, and then the only option open to Israel would be to go to war over those violations.

Or accept them tacitly, as its many friends in the West would undoubtedly counsel.

The blog Elder of Ziyon charges the NY Times with a blatant lie over their unquestioning quote of Morsi’s assertion regarding Camp David and the Palestinians: “Camp David does not say that there will necessarily be a Palestinian Arab state in the West Bank and Gaza. It most certainly says nothing about a full Israeli withdrawal from the territories, only that its final status (and, by implication, its borders) will be up for negotiation after a transition period.” (I recommend the full article, if only for Monday morning water cooler talking points).

Morsi told the Times he sees “absolutely no conflict” between his loyalty to the Muslim Brotherhood and his vows to govern on behalf of all, including members of the Christian minority or those with more secular views.

It reminded me of Woody Allen’s quote: “And the lion will lie down with the lamb, but the lamb won’t get much sleep.” Those Christian Copts have been treated to some heavy governing since the Brothers’ president has been in charge.

I’ll be spending the next six weeks in deep prayer for the Republicans to retain their hold on the U.S. House of Representatives (the Senate will very likely remain in the Democrats’ possession, perhaps with several key gains). I’ll be praying not because I have much sympathy for the way they’ve conducted themselves over the past two years – some of it was hard to watch. I only want them to keep the House so that Rep. Ileana Ros-Lehtinen will remain Chair of the House Foreign Relations Committee.

She is the only one willing to stand up to the Administration on aid to Egypt, and she has suspended this aid last week in light of Morsi’s lackluster defense of the primary American asset in his capital.

I trust that she will continue to inspire our foreign policy in her persistent and very effective way. At a time when Secretary of State Hillary Clinton is close to tears when she wails over those ungrateful Libyans who dare kill Americans after all we’ve done to free them from tyranny – I feel much better with a closed-fisted Hispanic warrior from Florida drawing a line in the sand for Mr. Morsi.

One final word about Chutzpah – it could be argued that our own Prime Minister Benjamin Netanyahu has been doing his own bit of lecturing to the U.S. while accepting some $3 billion a year in aid. Fair enough. But I fail to recall the last time a frenzied Jewish mob scaled the walls of the American embassy on HaYarkon Street to burn the flag. They might scale those walls if Red Hot Chili Peppers were visiting inside, though. 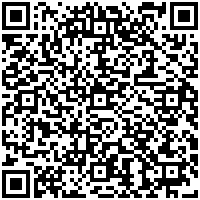