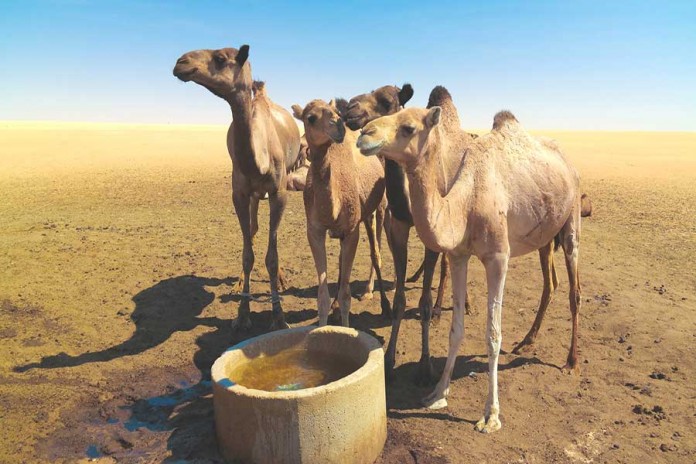 When Abraham’s servant travels to the Land of Aram to find a suitable spouse for Abraham’s son Isaac, the servant is determined to find the right girl by seeking somebody who engages in the sort of kindness that matches Abraham’s own. He decides that if he asks a girl for a drink of water from her jug, and the girl in turn offers to let him and his camels drink, then this will show that she has mastered the trait of kindness and is a suitable match for Isaac. Of course, it was Rebecca who fit that exact description.

What, if anything, are the differences between these terms?

The verb lehashkot cognates with the noun mashkeh (“beverage,” sometimes with the implication of an alcoholic drink). Rabbi Aharon Marcus (1843-1916) explains that the terms lehashkot/mashkeh are derived from the biliteral root shin-kuf, which refers to “movement” or “motivation.”

Rabbi Marcus uses this idea to elucidate the verse “and a cloud arises from the land and is hishkah the land” (Genesis 2:6). In this particular case, lehashkot refers to the current or flow of water as it waters the land. Rabbi Marcus similarly explains that teshukah (“desire”) refers to the motivation or inspiration that is the catalyst for movement; shok (“thigh”) is the body part that moves the leg; and shuk (“market”) is the place to which all people strive to reach (in order to buy or sell goods). He also notes that Abraham’s trusted servant Eliezer is called his meshek (15:2), which is a reference to the on-going need for movement in his role as manager of a lively household.

Like Rabbi Marcus, Rabbi Shlomo Pappenheim (1740-1814) of Breslau also traces lehashkot and mashkeh to the two-letter root shin-kuf, but he defines that root’s core meaning as “making consecutive sounds.” The word shokek (“to roar”) derives from this core meaning because it denotes producing consistent sounds one after the other, like a metronome. The terms l’hashkot and mashkeh similarly denote a peculiar characteristic of liquids: that they tend to make noise when moved, especially when poured from one receptacle to another.

Rabbi Shmuel David Luzzatto (1800-1865), sometimes known as Shadal, also writes that the word meshek used to describe Abraham’s servant Eliezer derives from the root shin-kuf-kuf, which denotes “movement and sound-making.” The way he understands it, meshek denotes the manager who directs all movement and logistics within a household.

In another essay on the topic, Shadal writes that the primary meaning of shin-vav-kuf is “liquid,” and from that came the verb form lehashkot, which is the action most associated with liquids. From that meaning, which is associated with man’s natural thirst and desire to drink, came about the term teshukah to denote desiring or lusting after anything. He explains that shokek refers to the sound made by a hungry and tired bear looking for something to devour. Because pouring liquid produces something that sounds like shok shok, this term also came to be associated with noise-making.

Although the classical lexicographers like Rabbi Yehuda Ibn Chayyuj, Rabbi Yonah Ibn Janach, and Rabbi David Kimchi see lishtot as a derivative of the triliteral root shin-tav-hey, Menachem Ibn Saruk in his Machberet Menachem traces that term to the biliteral root shin-tav. Rabbi Shlomo Pappenheim explains the core meaning of this two-letter root as “putting something in its proper place.” Along these lines, Rabbi Pappenheim in Cheshek Shlomo explains that lishtot helps the digestive system process foods and put them in their proper place in order to maximize their nutritional value. This explains why, whenever juxtaposed in the Bible, the verb for “drinking” always precedes the verb for “eating.”

The word hagmi’ini means something along the lines of “let me drink.” All the early lexicographers, including the biliteralist Menachem Ibn Saruk, understand its root to be the triliteral gimmel-mem-aleph. Rabbi Pappenheim, however, traces this term to the biliteral root gimmel-mem (“spongy or absorbent material”), which gives way to the word gome (“spongy reed”) that grows in marshy wetlands. Based on that, Rabbi Pappenheim explains that hagmi’ini refers to the request that one be able to drink the liquid the way a spongy reed soaks up water.

Rashi (to Genesis 24:17) takes another approach. He connects the root gimmel-mem-aleph to the root gimmel-mem-ayin (possibly via the interchangeability of aleph and ayin). The latter root does not appear in the Bible, but does appear in the Mishna (Shabbat 8:1, 14:4) and elsewhere in rabbinic literature (see Targum to Job 39:30) to mean “swallow.” This comparison is based on the Talmud (Shabbat 77a), which discusses whether the word in the Mishna should be spelled with an aleph or ayin, and then cites the verse of hagmi’ini as proof that it should be spelled with an aleph.

I have two other possible etymologies for hagmi’ini. Perhaps this Biblical term is related to the Mishnaic Hebrew word guma (“pit/hole,” which appears in Chullin 2:9 and Parah 2:5). According to this understanding, the act of drinking can be viewed as a way of pouring things down the hole of one’s mouth, like the English idiom “down the hatch.” Alternatively, my wife Shira Yael Klein (nee Deifik) suggests that the root of hagmi’ini is an onomatopoeic rendition of the sound made by, glugging, gulping, or slurping down a drink.