Nine Israeli leftwing activists from the Two States, One Homeland NGO, including journalist Meron Rapoport, on Wednesday had to be rescued from an Arab mob in Ramallah that was throwing Molotov cocktails and stones at their vehicle. According to an IDF report Wednesday night, the nine Israelis were on their way to visit a local journalist, also a member of their NGO, for the post-fast Iftar meal. Eight of them managed to flee on their own, a ninth reached the offices of the Palestinian Authority secret police and was handed over to the IDF near Beit El. All nine are under investigation for violating a martial law decree against unauthorized entry into Area A in Judea and Samaria.

But one of the activists, Eliaz Cohen, told Walla that the group had not been attacked in transit, as Israeli media reported, but that a few Arabs had thrown the stones and one, singular, small Molotov cocktail at their parked car while they were inside their host’s home, dining. According to the activists they all took their time and had not been chased away, and only when the meal was over did eight of them calmly leave, while Rapoport went down to file a complaint with the PA police.


The NGO’s statement stressed that “despite some of the reports, at no point did we feel threatened, and our Palestinian friends were shocked by the incident. The thing that frightens the most those wishing to maintain the status quo are Israelis and Palestinians who talk and act together.”

Eliaz Cohen posted on his Facebook page that the group has been meeting in Ramallah once a month for the past four years, and they never ask for the IDF’s permission, nor are they usually attacked by anyone. Last night, too, things were going just fine, he claims, they were sitting and dining with their Arab hosts, when suddenly they heard yelling from outside and saw Rapoport’s car was on fire. He claims that Arab passers-by used a fire extinguisher to put out the fire, and then a Ramallah firefighters’ truck arrived, as well as PA security forces.

Cohen makes such an effort to stress how unafraid he and his friends were in this situation, he completely forgets to describe who exactly had set fire to the car and why.

Rabbi Haim Navon commented on his Facebook page regarding the Eliaz Cohen insistence that the car had not been pelted with stones, “only” firebombed, and that the efforts to forge peace between individual Jews and Arabs will continue, saying, “The Arabs of Israel have understood that we are here to stay, and have accepted us. On the day the Palestinians understand they can’t defeat us — peace will arrive. In the meantime, don’t waste those cars…” 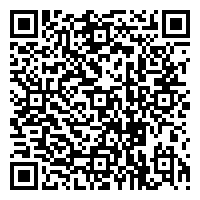