Guests at a Jewish teen’s birthday party in Paradise Valley, Arizona, on Nov. 20, decorated their cupcakes with swastikas. Images of the Nazi influenced topping have been infesting social media after the teen’s mother posted her account of the event on her Facebook page (she has removed the post since).

The mother wrote she was hoping her own shocking revelation it would be used as a teaching moment for parents. The girls told the mother they created the Nazi cupcakes because they wanted to “be funny,” after having attended a Holocaust class before the party.

Holocaust jokes are widely considered to be a defense mechanism. In fact, in 2014, Yad Vashem published in book form (It Kept Us Alive: Humor in the Holocaust) the Ph.D. thesis by Tel Aviv University philosophy major Chaya Ostrower titled, “Humor as a defense mechanism in the Holocaust.” Ostrower interviewed 84 Holocaust survivors, finding that Jewish death camp inmates told Holocaust jokes as “Defense Mechanism, including its sub types – Self-humor and Gallows humor.”

But the mother was not amused by the girls’ creative coping mechanism exercised under her roof. Neither was Carlos Galindo-Elvira, Director of the Arizona Anti-Defamation League, who told local TV station 12News that “when you joke with symbols like the swastika you begin to normalize them and make it very casual within our society.”

In a later post, this one still online while his story is being filed, the mother wrote: “I know many people are asking what happened after yesterday, so I hope this will suffice. I received wonderful feedback from each and every parent of the girls at the party fully underscoring that each family spoke at length with their daughters about the severity of the issue. My daughter spoke again with her friend who apologized profusely and told her she thought it was just “being funny” but understands that her actions weren’t humorous in the slightest.”

The mother added that she “spoke with the school and they will be reaching out to all the teachers to relay to their students that hateful speech/actions/insignias will not be tolerated or condoned. Opening this hurtful incident up to others to provide a teaching moment will hopefully stop others from promoting ideas of hate is all I ever wanted. Happy early Thanksgiving to you and yours.”

Moshe and Chaim are being taken to be shot. The Executioner asks them, “Do you have a final wish?” to which Chaim answers, “No!” But Moshe says: “I can’t face the firing squad, please give me a blindfold.”

So Chaim turns to Moshe and says: “What are you making trouble for?” 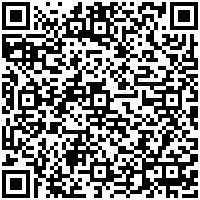