Mona Eltahawy is an extremely well-spoken, Egyptian-American journalist who has become the g0-to speaker for comments on the Middle East in general, and on Egypt and Women’s issues in particular.  A speaker who stays on message no matter what is being asked, Eltahawy’s theme is: former Egyptian President Hosnai Mubarak and those who supported him are always bad, Muslims seeking to control their own destiny are always good and should be supported in the name of freedom and democracy, no matter how reprehensible their actions. Over the past few years Eltahawy has regularly been represented as an expert on such media outlets as CNN, the Guardian (UK), The New York Times and the Washington Post.

Eltahawy was arrested Wednesday evening, September 26, in a New York City subway station because she insisted free speech included her right to deface an ad espousing a message with which she disagreed – Pamela Geller’s anti-Jihad ad discussed and shown here.  She also insisted her free speech right extended to spraying toxic paint on a woman, Pamela Hall, who tried to interfere with Eltahawy’s efforts to deface Geller’s ad.  And then Eltahawy blamed Hall for interfering with her free speech rights and accused the arresting police officers of interfering with her “non-violent” protest, thereby engaging in anti-democratic activity.


It appears Eltahawy has a singularly self-focused understanding of freedom and democracy.  Given her limitations, it is problematic that so many media outlets rely on Eltahawy as an “expert.”  It is possible that given her criminal activity Wednesday evening, some will see her convoluted views of reality as casting doubts on past Eltahawy discourses.

The journalist’s inability to recognize why her activity was criminal and subverted the First Amendment, simply because Geller’s anti-Jihad ad constituted speech with which she didn’t agree, is telling.

But this isn’t the first time Eltahawy’s view of reality has been refracted through her own, narrow prism.

Eltahawy is best known for being an ardent activist for women’s rights, a dangerous and valiant effort for a Muslim.  She has written about the enormously high percentage of women who have been sexually assaulted in Egypt, as many as 80 percent, and that four out of five Egyptian women have reported being sexually assaulted.

Although Eltahawy has been highly critical and very vocal about the subjugation of women under Islam, when that view bumps up against her global recognition as an articulate spokesperson for the revolutionary Arab Spring, a disconnect takes place.

In the context of the anti-Jihad ads which she defaced, Eltahawy expressed outrage over the use of the term “savage,” to describe Jihadi activity.  In her view, the use of the word savage was an insult because she interpreted it to refer to all Muslims.  While defacing the ad, she told Hall, who tried to prevent the ad from being damaged, that she was protesting racism, and that Hall was defending racism.

But Eltahawy described Muslims who sexually assaulted and beat her last winter as a “pack of wild animals.”  So, was her anger over the use of the term savage, when she described wild, violent Muslims as “wild animals” hypocritical?  Not necessarily, because her criticism of the Egyptian police is consistent with her world view.  There were numerous reports of women assaulted by the civilian crowds, the revolutionaries, in Tahrir Square, during the Arab spring.  And it is in commenting on those assaults that Eltahawy’s hypocrisy is made clear.

Perhaps the best known, to western audiences, of sexual assaults by the Arab spring activists, is the assault on CBS’s Lara Logan.  Logan was brutally physically and sexually assaulted by those demonstrating in Tahrir Square crowds in February, 2011.

When Eltahawy was asked to comment on CTV News on the attacks on Logan, she “unequivocally condemned” the violence experienced by Logan.  However, the focus of her ire was always pointed back at the Mubarak regime, which was, she said, “known for targetting women.”

Eltahawy even went so far as to insinuate that Logan’s story was in some ways questionable, or at least an anomaly.  She also deflected the responsibility for the attack on unnamed others.

“Women I know said it was the safest area in Cairo,” Eltahawy said of Tahrir Square during the demonstrations.  But after Mubarak, the area was “open to all, so we don’t know who else was there.”

Pamela Hall is pressing charges against Eltahawy.  Her clothing and her bags were damaged by the paint.  When reached by The Jewish Press, Hall said she knew who Eltahawy was as soon as she saw her, but she was “surprised” to see her spray painting the ad.

According to Hall, using “paint is a much more serious act than slapping a sticker up and walking away.  What was she thinking?” 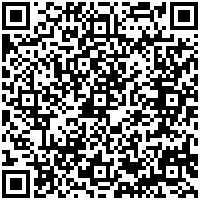