For the full text of PM Netanyahu’s speech to AIPAC, click here.

Prime Minister Benjamin Netanyahu blasted the notion that a United Nations resolution could solve the Israeli-Palestinian conflict, during a speech to the pro-Israel lobby AIPAC on Tuesday, March 22.

“The UN has a shameful record of singling out Israel for castigation and condemnation,” Netanyahu told the AIPAC conference, speaking via satellite from Jerusalem. “Why would anyone think that the UN could decide a fair and secure peace for Israel?”

Netanyahu sharply criticized those who “seek to impose terms on Israel in the UN Security Council,” arguing that “such efforts can only convince Palestinians that they can stab their way to a state. Not a state alongside Israel, mind you, but a state instead of Israel.”

He also expressed satisfaction that the presidential candidates who addressed the conference the previous evening all declared their opposition to any solutions to the conflict “imposed” by the United Nations.

Such a resolution “could kill the chances of peace for many, many years,” Netanyahu warned.

“What is your message to the Palestinian youth?” a woman asked a young Palestinian girl in the montage. The young girl brandished a knife and answered repeatedly, “Stab! Stab! Stab!”

“That little girl wasn’t born to hate, she was taught to hate,” Netanyahu said, arguing that incitement by Palestinian President Mahmoud Abbas’ political faction was driving the recent violence and perpetuating the conflict.

Netanyahu reiterated his willingness to immediately begin direct negotiations with Abbas for “two states for two peoples,” leading to the creation of “a demilitarized Palestinian state that recognizes the Jewish state.”

Netanyahu also addressed the threats posed by the Iranian government, referencing the recent Iranian ballistic missile test in which the missile was inscribed in Hebrew with the phrase: “Israel must be wiped out.”

“The writing is not on the wall,” Netanyahu quipped, “it’s on the missile.”

Netanyahu concluded by showing a clip of the testing of Israel’s Arrow 3 missile defense system, developed with significant U.S. support, thanking the United States for its efforts and warning Iran that “Israel will defend itself mightily.”

Cameron Pearl contributed to this report. 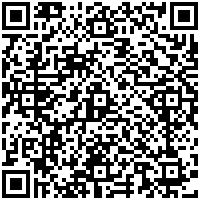