The White House Wednesday tweeted a diagram promoting the nuclear deal with Iran that directly ridiculed Prime Minister Binyamin Netanyahu’s “red line” cartoon in the United Nations three years ago — but the White House version also was full of inaccuracies.

Netanyahu’s cartoon, which was headlined around the world, show a red near the top of a bomb to get across his point that “there is only one way to peacefully prevent Iran from getting atomic bombs and that is by placing a clear red line on Iran’s nuclear weapons program.”

Wise guys at the White House dreamed up a similar diagram with an opposite message and with the help of a blue line at the bottom of the bomb to illustrate that Iran has a zero chance of developing a nuclear bomb under the administration’s proposed deal.

“Under the framework for an Iran nuclear deal, Iran uranium enrichment pathway to a weapon will be shut down,” the chart reads.

There is one problem with the diagram. It is not true.

President Obama has actually bragged that Iran will be limited to “only” 6,000 centrifuges, all of which can produce uranium, which would be low-grade. The sketch accurately states that under the deal, there will be “no production or stockpile of highly enrich uranium.” Experts have said that 6000 centrifuges is enough to produce a bomb.

But a picture tells a thousand words, in and this case, they all are wrong because that little blue line clearly shows Iran would have “0%” enriched uranium, which is a lie.

The Obama administration’s diagram also claims that Iran would be 90 percent on the way to a bomb if there is no deal, but that statement only makes Netanyahu’s argument stronger as Iran is so close to achieving that, it could easily violate the deal and achieve its goal while the world argues about whether to impose stiff sanctions after the fact.

President Obama also admitted this week, that in just over a decade — with the deal, Iran would be able to get the bomb before anyone would even notice. The State Department tried to walk that one back.

Jacques Hymans, an associate professor of international relations at the University of Southern California and an expert on nuclear proliferation, told Vox.com last year:

As long as they have those centrifuges sitting there, the deal is really walking on thin ice.

Below is the White House’s latest gimmick to sell the nuclear deal with Iran. 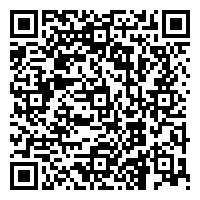