Israel’s President Reuven Rivlin and his wife Nechama hosted their annual bar and bat mitzvah event Monday at the official President’s Residence for around 60 children of families affected by terrorist attacks. 
The event, emceed by Esti Ginzburg, featured vocalist Stephane Legar and also Nehorai Zarka ben Saadon, the son of Michael ben Saadon, z’l who was killed in a terrorist attack in Eilat in 2007, who spoke on behalf of the children.

“Chanukah will soon be here, a holiday of light and thanksgiving. A symbol of the victory of the spirit, ben Saadon said. “We, the family of victims of terrorism, will defeat the darkness and the difficulty, with God’s help, and with the help of joy and boundless love between all people. To mark our entry to adulthood and accepting the obligations of the Torah as adults, let us all decide that each one of us will do good and bring light to the world, each one of us with his or her own unique and special light.”

“Dear bar mitzvah boys and bat mitzvah girls, Mazal Tov! Happy bar and bat mitzvah! Today is a celebration for you and for us,” Rivlin said with a smile.

“Your families can hardly believe it. It feels like you were just born, and now you are young men and women full of ideas and dreams.

“In Jewish tradition, bar and bat mitzvah marks the stage of growing up and entering the world of adult responsibilities. This is the age when carefree children discover that the world is not always rosy,” he said to the children and their families.

“But you, dear bar and bat mitzvah children, sons and daughters of victims of terrorism, you have been aware of that since you were young. You were exposed to pain, loss and difficulty too young in life. You needed to take responsibility too young and too quickly. Each of you grew up in that difficulty. You learned to grow through the pain, and with it.

“Just recently, the communities of the south near Gaza were fired on. The children of the south continue to live their daily lives and routines. I know that some of you live in the south and have grown up in the shadow of rockets and missiles. And there are some of you who have been injured, or family members have been injured, by them. I am not giving you strength – you are the strongest people there are!”

At the end of his remarks, the president said he hoped the young people would continue to be a source of strength, pride, hope and consolation for their families. 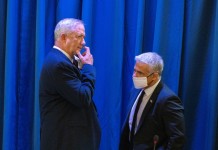 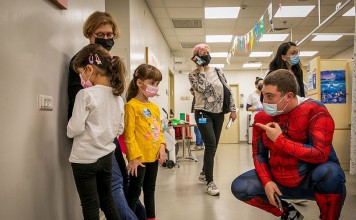